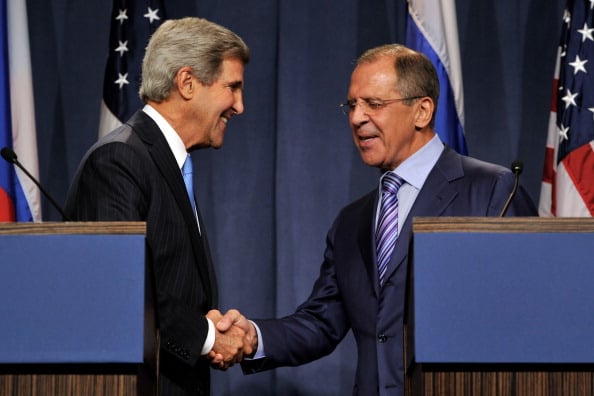 Russia and the United States put aside bitter differences over Syria to strike a deal on Saturday that by removing President Bashar al-Assad’s chemical arsenal may avert U.S. military action against him.

After three days of talks in Geneva, U.S. Secretary of State John Kerry and Russian Foreign Minister Sergei Lavrov demanded Assad account for his secret stockpile within a week and let international inspectors eliminate all the weapons by the middle of next year – an “ambitious” target, Kerry said.

The accord leaves major questions unanswered, including how feasible such a major disarmament can be in the midst of civil war and at what point Washington might yet make good on a continued threat to attack if it thinks Assad is reneging.

Under the Geneva pact, the United States and Russia will back a U.N. enforcement mechanism. But its terms are not yet set. Russia is unlikely to support the military option that President Barack Obama said he was still ready to use.

“If diplomacy fails, the United States remains prepared to act,” Obama said. “The international community expects the Assad regime to live up to its public commitments.”

To that end, the Pentagon said U.S. military forces were still positioned to strike, if ordered.

But for Assad’s opponents, who two weeks ago thought U.S. missile strikes were imminent in response to a gas attack on rebel territory, the deal was a blow to hopes of swinging the war their way. Kerry and Lavrov said it could herald broader peace talks, as warplanes hit rebel positions again near Damascus.

The accord, however, was as much about U.S.-Russian ties as it was about Syria. The conflict has chilled relations to levels recalling the Cold War.

In reaching a bilateral deal after what one U.S. official described as three days of “hard-fought” debate, Moscow and Washington can each count benefits.

For Russian President Vladimir Putin, it brings management of the Syrian crisis back to the United Nations. For Obama, it solves the dilemma created by Congress’ reluctance to back military strikes that he was preparing without a U.N. mandate.

Lavrov told a joint news conference in Geneva, “It shows that when there is a will … Russia and the United States can get results on the most important problems.”

“The successful realisation of this agreement will have meaning not only from the point of view of the common goal of eliminating all arsenals of chemical weapons, but also to avoid the military scenario that would be catastrophic for this region and international relations on the whole.”

Kerry acknowledged that further success was far from guaranteed: “The implementation of this framework, which will require the vigilance and the investment of the international community, and full accountability of the Assad regime, presents a hard road ahead,” he said.

Despite a measure of camaraderie on display in banter between the two men during the presentation of the two-page framework agreement, they remained openly at odds over the U.S. willingness to use force in Syria without U.N. backing.

In Istanbul, the head of the Syrian rebel Supreme Military Council, General Selim Idris, called it a blow to opposition hopes of overthrowing Assad and accused the Syrian president of circumventing any disarmament by already sending chemical weapons to allies in Lebanon and Iraq in recent days.

Qassim Saadeddine, a rebel commander in northern Syria, told Reuters: “Let the Kerry-Lavrov plan go to hell. We reject it and we will not protect the inspectors.”

Idris said, however, his forces would help the inspectors. A U.S. official said Washington believed all Syria’s chemical weapons remained in areas under government control.

Assad, backed by Iran, crushed demonstrations demanding democracy in 2011 and, while losing territory, has withstood a full-blown uprising supported by Arab states and the West.

Prodded by Russia, he has now agreed to abide by a global chemical weapons ban and submit to controls by the U.N.-backed Organisation for the Prohibition of Chemical Weapons, or OPCW.

That will deprive him of arms he denies having used and spares him, at least for now, what were likely to be heavy U.S. and French missile strikes and bombing raids.

The United Nations said on Saturday it had received all documents necessary for Syria to join the chemical weapons convention. Syria would come under the treaty starting on Oct. 14, it said.

Assad’s opponents criticise the United States and its allies for the focus on chemical weapons, which account for a very small number of the more than 100,000 dead in the war, and of abandoning them to face a deadly, Russian-armed enemy.

On Saturday, as government jets struck rebel-held suburbs of the capital and troops fought rebels on the ground, one opposition activist in Damascus voiced anger and resignation

“The most important point is the act of killing, no matter what is the weapon,” said Tariq al-Dimashqi. “The killing will continue. No change will happen. That is it.”

Having taken the surprise decision two weeks ago to seek congressional approval for strikes to punish Assad for using poison gas, Obama faced a dilemma when lawmakers appeared likely to deny him authorisation.

They cited unease about inadvertently helping Islamist militants among the rebels and a wariness of new entanglements in the Middle East after wars in Iraq and Afghanistan.

The weapons deal proposed by Putin, a former KGB agent intent on restoring some of the influence Moscow lost with the Soviet collapse two decades ago, offered Obama a way out.

But Obama has been bombarded with criticism for his handling of Syria and a muddled message, moving the United States toward, and then back from the brink of striking Syria over an Aug. 21 poison gas attack that Washington blames on Assad.

“It requires a wilful suspension of disbelief to see this agreement as anything other than the start of a diplomatic blind alley, and the Obama administration is being led into it by Bashar Assad and Vladimir Putin,” they said.

Carl Levin, a Democrat aligned with Obama and head of the Senate Armed Services Committee, hailed the agreement and noted it did not restrict the United States from supporting the moderate Syrian opposition or acting unilaterally, if needed.

Under the terms of the U.S.-Russian agreement, the U.N. Security Council – on which Russia has a veto – will oversee the process. Syria must let the OPCW complete an initial inspection of its chemical weapons sites by November.

Kerry said Assad must produce a “comprehensive listing” of its chemical weapons within a week. The goal is to complete destruction of Syria’s arsenal in the first half of 2014.

The agreement states that a Security Council resolution should allow for regular assessments of Syria’s behaviour and “in the event of non-compliance … the UN Security Council should impose measures under Chapter VII of the UN Charter”.

Chapter VII can include force but can be limited to other kinds of sanction. When Kerry said the council “must” impose measures under Chapter VII, Lavrov interrupted to point out that the agreed text says only it “should” impose penalties.

“There’s no diminution of options,” Kerry said, noting Obama’s right under U.S. law to order military action, with or without support from Congress or any international body.

The Pentagon said it had made no change to the forces it had lined up. A spokesman said, “The credible threat of military force has been key to driving diplomatic progress.”

Lavrov said of the agreement, “There is nothing said about the use of force and not about any automatic sanctions.”

Putin has supported Assad’s contention that the sarin gas attack on Aug. 21, which Washington says killed over 1,400 civilians, was the work of rebels trying to provoke Western intervention.

Lavrov said, however, that Russia would support U.N. punishment for anyone whose guilt was clearly proven.

A new round of argument about responsibility for the Aug. 21 deaths is likely in coming days, once U.N. inspectors deliver their report on the incident to the world body.

In two weeks, when the U.N. General Assembly convenes in New York, Lavrov and Kerry have said they will meet the U.N. Syria envoy to see if they can push forward a plan for an international peace conference to negotiate an end to the war.

An effort last year for a political solution, dubbed the “Geneva Plan” and calling for a transitional government, went nowhere as Assad refused to cede power and the opposition insisted he could not be a part of any new political order.

Kerry said Saturday’s chemical weapons deal could be “the first concrete step” toward a final settlement. Lavrov said he hoped all parties to the conflict could attend a conference in October, without setting pre-conditions for their attendance.

There is little sign of softening among Syrians, however, or among rival backers in the Middle East, where the conflict is part of a broader regional confrontation with sectarian elements between Shi’ite Iran and Sunni Muslim Arab leaders.

Senior Kerry aides involved in the talks said that the United States and Russia agreed that Syria has 1,000 tonnes of chemical agents, including nerve gas sarin and mustard gas – one of the world’s largest stockpiles of such material.

But the officials said there was no agreement on how many sites must be inspected. Washington thinks it is at least 45.

One U.S. official called the task “daunting to say the least”. Another noted there were “targets … not a deadline”.

The weapons are likely to be removed through a combination of destroying them in Syria and shipping some for destruction elsewhere, U.S. officials said. Russia is one possible site for destruction, but no final decisions have been made.

The Hague-based OPCW has never moved weapons across borders before, because of the risk, and never worked in a war zone.