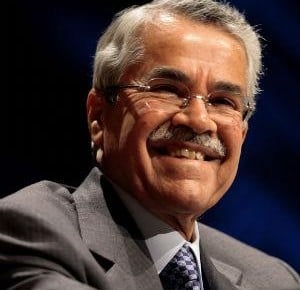 The White House embraced over the weekend recent comments by Saudi Arabia’s energy minister some market watchers had taken as a signal that consumer nations need not release emergency petroleum reserves to calm oil prices.

Saudi Arabia’s Oil Minister Ali al-Naimi said in a statement on Sept. 10 that the world’s largest crude exporter was concerned about high oil prices, would take steps to moderate them, and would meet any additional demand from its customers.

The Kingdom would continue to work with other Gulf Cooperation Council countries and with OPEC to defend the stability of the oil market, Naimi said.

Stubbornly high U.S. oil prices, which on Friday hit more than $100 a barrel, the loftiest since May 4, have led industry watchers to guess whether President Barack Obama will tap the Strategic Petroleum Reserve (SPR) ahead of the Nov. 6 election.

The White House reiterated it was keeping all options on the table to calm prices, but also applauded Naimi’s comments.

“We … welcome Saudi Arabia’s continued commitment to take all necessary steps to ensure the market is well supplied and to help moderate prices,” a White House official said in an email over the weekend.

Saudi Arabia pumped oil at about 9.8 million barrels per day in July and August, just off multi-decade highs of 10 million bpd hit earlier in the year. It has said it can easily increase output to more than 12 million bpd if needed.

The White House’s embracing of Naimi’s comments comes after some analysts said the SPR is a tricky tool to manage fuel prices in the short term, even though it could help prevent a spike over the long term.

Tapping the reserve can make traders and other market participants skeptical that oil producers are well equipped to satisfy world demand, said Blake Clayton, an energy fellow at the Council on Foreign Relations in New York.

“A release can make markets more anxious, not less, about future conditions in the oil market,” Clayton wrote in a recent paper about Obama’s tapping of the SPR last year when oil exports plummeted from Libya, which was undergoing civil war.

Global oil prices rose to nearly $117 a barrel on Friday on persistent worries about a potential Israeli attack on Iran, anti-U.S. protests over a film demonstrators consider blasphemous to Islam, and a third stimulus from the U.S. central bank. That price is close to the $120 level some have said would push the Obama administration to tap reserves.

But if the administration decides to take such a step before the U.S. election, the timing might be hard to get right.

On the day the United States and the International Energy Agency released 60 million barrels of emergency oil last year, crude prices fell. Within two weeks they regained the losses and started climbing again.