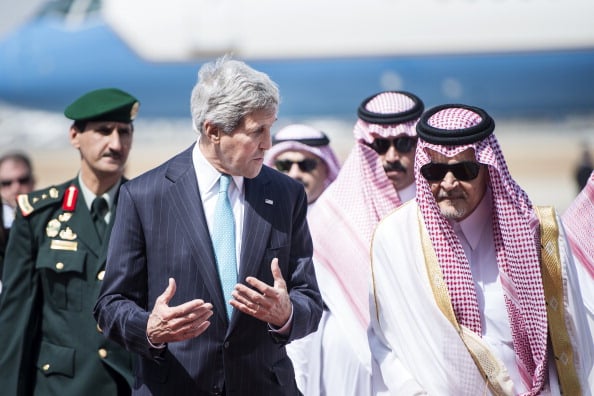 The United States and its Gulf allies will try to agree on new security measures at a summit in Washington next week to guard against destabilising actions by Iran in the region, U.S. Secretary of State John Kerry said on Friday.

The West hopes to secure a nuclear deal with Tehran by an end-of-June deadline and this has stirred anxiety among Washington’s Gulf allies who fear Shi’ite Muslim Iran’s intentions in the region.

Iran and the Gulf monarchies are also at loggerheads in Yemen, where Saudi-led warplanes again bombed Iranian-allied Houthi rebels on Friday, though Riyadh also then announced a conditional five-day humanitarian ceasefire.

After marking the 70th anniversary of the end of World War Two in Europe at the Arc De Triomphe in Paris, Kerry hosted counterparts from Saudi Arabia, Kuwait, United Arab Emirates, Qatar, Oman and Bahrain, as well as the head of the Gulf Cooperation Council (GCC).

The Paris meeting set the stage for a summit next week in Washington and Camp David between U.S. President Barack Obama and the six-nation GCC.

The Obama administration faces a formidable challenge to allay Gulf Arab fears over a nuclear deal with Tehran.

“President Obama completely understands the stakes,” Kerry told a news conference, “We are fleshing out a series of new commitments that will create between the United States and the GCC a new security understanding, a new set of security initiatives. That will take us beyond anything that we have had before,” he added.

U.S. officials have told Reuters the Washington summit would create a region-wide defense system to guard against Iranian missiles and could be accompanied by enhanced security commitments, new arms sales and more joint military exercises.

“It is not a one-way street, it is a two-way street, with mutual interests and mutual needs that need to be addressed,” Kerry said.

“I am confident that with Camp David those views are going to take shape in a form that will greatly enhance our ability to meet the needs of our people, and the needs of all those people, who want a future that is free of terrorism…,” he added.