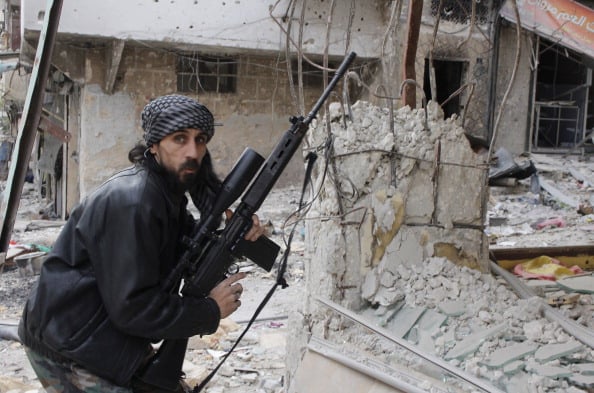 Opponents of Syrian president Bashar al-Assad have been at an impossible disadvantage since the start of the Syrian conflict because the United States and Britain refused to help them, an influential Saudi Arabian prince said on Saturday.

The United States and Britain suspended non-lethal aid to northern Syria on Thursday after reports that Islamic Front – a union of six major rebel groups – had taken buildings belonging to the Free Syrian Army’s (FSA) Syrian Military Council on the border with Turkey.

“What’s more damaging is that since the beginning of this conflict, since the FSA arose as a response to Assad’s impunity, Britain and the U.S. did not come forward and provide the necessary aid to allow it to defend itself and the Syrian people from Assad’s killing machine,” Prince Turki told Reuters on the sidelines of the World Policy Conference in Monaco.

“You have a situation where one side is lopsided with weapons like the Assad regime is, with tanks and missiles – you name it, he is getting it – and the other side is screaming out to get defensive weapons against these lethal weapons that Assad has,” Turki said. “Why should he stop the killing?”

Saudi Arabia and Qatar are the main backers of the main opposition Syrian National Coalition and the FSA, which they have aided with weapons, training, money and military intelligence in the fight against Assad’s government.

Assad is backed by Iran, which struck a preliminary deal on with world powers in November to limit sanctions relief for more international oversight of its nuclear programme.

Western countries have held back from giving heavy weapons such as anti-tank and missile launchers for fear they could fall into the wrong hands.

Commanders from the Islamic Front are due to hold talks with U.S. officials in Turkey in coming days, rebel and opposition sources said on Saturday, reflecting the extent to which the Islamic Front alliance has eclipsed the FSA brigades.

A rebel fighter with the Islamic Front said he expected the talks to discuss whether the United States would help arm the front and assign to it responsibility for maintaining order in the rebel-held areas of northern Syria.

Prince Turki said that while he hoped Iran was serious with regard its interim nuclear deal, it needed to provide some confidence-building measures with its Gulf Arab neighbours, beginning in Syria.

“Iran is coming at us with a broad smile. Let’s hope they are serious about that. We would like to see Iran first of all get out of Syria,” he said.