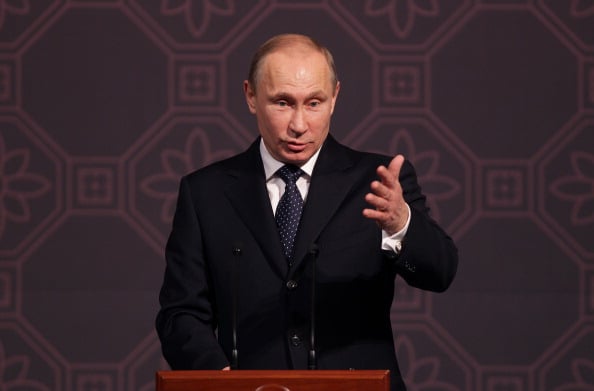 Unfamiliar strains between Washington and its Arab allies have given Russia an opportunity to regain some lost influence in the Middle East, capture arms sales from U.S. competitors and enjoy the unusual spectacle of its old rival looking puny.

No one expects Moscow to challenge the United States as the dominant security guarantor in the Gulf. Nor will Washington cede its place as the main outside player in Israeli-Palestinian peace talks, Iran’s nuclear dispute or other regional issues.

But a perception that America is an increasingly reluctant regional policeman, perhaps because it is less concerned about Arab oil shocks thanks to its own growing output, stirs fears among some Arab rulers that it is no longer a reliable ally.

Arabs feel the balance of world power is changing, and perceptions of U.S. weakness as it withdraws from Iraq and Afghanistan mean Gulf Arabs in particular are hedging their bets.

Russian President Vladimir Putin’s resolute support for the Syrian leadership has won grudging respect, even among Gulf Arabs who strongly disagree with the Kremlin’s policy.

That means that Russia has a chance to restore some of the clout it has lost since the high water mark of Soviet influence in the 1950s and 1960s, when many newly independent Arab states turned to socialism and Moscow for foreign support.

That decline in the Kemlin’s sway accelerated after the end of the Cold War two decades ago, a development President Vladimir Putin is expected to do his utmost to reverse.

How far Putin succeeds depends partly on his ability to persuade his ally, Syrian President Bashar al-Assad, to embark on peace talks with rebels and to keep his promise to give up his chemical weapons.

It also hinges on U.S. President Barack Obama’s ability to restore Gulf Arab trust in his policies on Syria, Iran and Egypt, countries where Saudi Arabia feels he displays weakness.

“Countries are discussing weapons deals with the Russians to send a message to Washington to get its policy straight,” Saber Sweidan, a former commander of the Kuwait air force, told Reuters.

“Putin thinks he can bring back the old Soviet empire, and if Obama continues with these policies, maybe Putin will.”

Not everyone is so downbeat about U.S. strategy, but attempts by Arab states to cosy up to Moscow are seen a way of signalling displeasure with Washington.

“But there are real limits about how far it can go, not least how capable it is,” he said. “No one can fill the (security) role played by the United States.”

In a development closely watched in the West, Egypt’s military-backed authorities hailed a new era of defence cooperation with Moscow last week during a visit by Russian defence and foreign ministers billed by both sides as historic.

Egypt and the Soviet Union were close allies until the 1970s, when Cairo moved closer to the United States, which brokered its 1979 peace deal with Israel.

A source close to the Russian Defence Ministry confirmed that the minister, Sergei Shoigu, and his team spoke with Egyptian counterparts about the sale of fighter jets and air-defence systems, although no deals had been finally agreed.

Despite a better diplomatic climate, Russia has a way to go to match the West’s arms supplies to the region.

Nevertheless, the region is already exploring a more diverse set of weapons suppliers.

Guy Anderson, Senior Principal Analyst at the IHS Jane’s Defence Industry news service, said that while he would not expect a big change in Gulf arms markets medium term, the region’s countries were using defence spending to diversify economies though investment partnerships with suppliers.

“They realise that the established relationships with Western powers will probably only get them so far – emerging defence equipment suppliers tend to be more flexible,” he said.

Sami al-Faraj, who advises the Gulf Cooperation Council on security matters, said Gulf Arabs wanted “the United States to understand that this is a two way relationship”.

“The twists and changes of President Obama have made us suspicious of his intentions,” he said, adding Gulf Arabs should expand their list of allies – “not necessarily negating or expelling the whole of the U.S. military role, but adding to it”.

India and China had an “affinity of interest” to secure the Gulf, and so did Turkey and Israel, he said.

The most recent signs of Arab dismay have come from Egypt.

Relations between Cairo and the United States deteriorated after the army overthrew Islamist President Mohamed Mursi on July 3. Washington later said it would withhold deliveries of some military and economic aid pending progress on democracy.

An Egyptian diplomat said Cairo was trying to diversify its arms suppliers and be the region’s top military power, and was not abandoning the United States. “It wants options,” he said.

Saudi Arabia and other Gulf Arab states, strong opponents of Mursi, were dismayed by the curb on aid to Egypt. The development added to Gulf Arab anger at Washington’s refusal to take action over Syria, where Saudi Arabia and its arch foe Iran are engaged in a proxy war.

Gulf Arabs are equally uneasy over Iran, suspecting Obama is pursuing rapprochement with the Islamic Republic, a power they say meddles in their internal affairs, at the expense of their own security concerns. Iran denies any interference.

A U.N. deal backed jointly by the United States and Russia to dismantle Syrian chemical weapons appeared to Obama’s critics in the region to have been a weakling’s way of avoiding a retaliatory U.S. military strike on Damascus following a chemical weapons attack on August 21.

“The Americans did not do what they said they were going to do. A man is held by his tongue, as we say in Arabic. Once you say something, follow through,” said a Gulf Arab source familiar with the regional defence industry.

Gulf officials and analysts say the problem the Arabs have with Washington centres on Obama and his close aides in the White House, who appear to take them for granted and to value more highly the prospect of a deal with Tehran.

The perception that individuals at the pinnacle of U.S. power do not empathise with Gulf Arab governments erodes Gulf Arab trust in Washington. As small, wealthy states surrounded by sometimes hostile, bigger ones, the ruling dynasties want to feel their ally will defend them in an emergency.