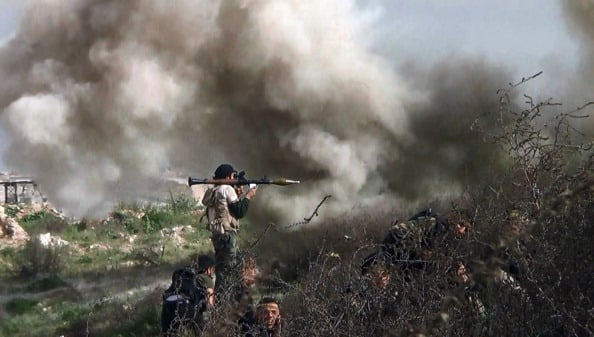 The United States and its allies geared up on Tuesday for a probable military strike against Syria that could come within days and would be the most aggressive action by Western powers in the Middle Eastern nation’s two-and-a-half-year civil war.

Western envoys have told the Syrian opposition to expect a military response soon against President Bashar al-Assad’s forces as punishment for a chemical weapons attack last week, according to sources who attended a meeting with the rebel Syrian National Coalition in Istanbul.

Amid a quickening drum beat of preparations, U.S. Defence Secretary Chuck Hagel said American forces in the region were “ready to go” if President Barack Obama gave the order.

Obama – long reluctant to intervene in the Syrian conflict – worked to solidify allied support, including calling the leaders of Britain and Canada, while U.S. intelligence agencies assembled what they are sure to say is final confirmation of the Syrian government’s culpability for Wednesday’s poison gas attack near Damascus.

White House spokesman Jay Carney said it would be “fanciful” to think that anyone other than Assad’s forces was behind the large-scale chemical attack, which activists said killed hundreds of people as they slept.

“There is no doubt who is responsible for this heinous use of chemical weapons in Syria: the Syrian regime,” Vice President Joe Biden said at a speech in Houston to the American Legion, a military veterans’ group.

Obama has yet to make a final decision on the U.S. response, Carney said, but left little doubt that it would involve military action. He insisted, however, that Washington was not intent on “regime change,” signalling that any military strikes would be limited and not meant to topple Assad.

The British military was also drafting plans. Prime Minister David Cameron, anxious, like Obama, not to emulate entanglements in wars in Afghanistan and Iraq that beset their predecessors, said any strikes would be “specific” so as not to drag the allies deeper into Syria’s civil war.

Cameron, who consulted with Obama on Tuesday for the second time in four days, recalled parliament for a debate on Syria on Thursday.

U. N. chemical weapons investigators put off until Wednesday a second trip to the rebel-held suburbs of Damascus where the chemical attack took place.

While evidence of chemical warfare could bolster an argument for intervention at the United Nations in the face of likely Russian and Chinese opposition, Western leaders and the Arab League have already declared Assad guilty.

Ahmad Jarba, president of the Syrian National Coalition, met envoys from 11 countries at an Istanbul hotel, including the U.S. ambassador to Syria, Robert Ford. The rebel leaders proposed targets for cruise missiles and bombing.

One participant said: “The opposition was told in clear terms that action to deter further use of chemical weapons by the Assad regime could come as early as in the next few days.”

Planning appears to focus on missile or air strikes. There is little public support in Western countries for troops to invade Syria.

“We have moved assets in place to be able to fulfil and comply with whatever option the president wishes to take,” Hagel said.

The precise timing of possible military action remained unclear, but it is certain to wait for an official U.S. intelligence report expected to blame Assad’s government for the chemical attack. The findings, considered merely a formality at this point, will be released this week, U.S. officials said.

Obama, under growing pressure for U.S. action on Syria, is expected to keep close watch on the situation there, but he will go ahead with a speech on Wednesday at Washington’s Lincoln Memorial to mark the 50th anniversary of slain civil rights leader Martin Luther King Jr.’s ‘I have a dream’ speech.

“The clock is ticking, and the administration is not going to want that to tick too long,” said Adam Schiff, a Democrat on the House of Representatives intelligence committee, as White House aides broadened consultations on Capitol Hill.

The large-scale use of chemical weapons in Syria crosses a “red line” that Obama established just over a year ago, and a failure to enforce it now could signal weakness to foes like Iran.

Syria’s government, backed by Iran, denies gassing its own people and has vowed to defend itself, but residents of Damascus are growing anxious.

“I’ve always been a supporter of foreign intervention, but now that it seems like a reality, I’ve been worrying that my family could be hurt or killed,” said a woman named Zaina, who opposes Assad. “I’m afraid of a military strike now.”

Russia, Assad’s main arms supplier, opposes military action and has suggested that rebel forces may have released the poison gas. China’s state news agency recalled how flawed intelligence was used to justify the U.S.-led invasion of Iraq in 2003.

Firm opposition from permanent members of the U.N. Security Council all but rules out a U.N. mandate of the kind that gave legal backing to NATO air strikes that helped Libyan rebels unseat Muammar Gaddafi two years ago.

Moscow and Beijing accuse Western powers of using human rights complaints, such as in Libya, to meddle in sovereign states’ affairs. White House spokesman Carney insisted: “The options that we are considering are not about regime change.

“They are about responding to a clear violation of an international standard that prohibits the use of chemical weapons.” Although Obama has long said Assad should step down, he is unwilling to commit to making that happen by force. Carney said it was “profoundly in the interests of the United States” to respond to the chemical weapons attack.

In Britain, Cameron told reporters: “This is not about getting involved in a Middle Eastern war or changing our stance in Syria or going further into that conflict. It’s about chemical weapons. Their use is wrong and the world shouldn’t stand idly by.”

In France, which played a major role in Libya, President Francois Hollande said he was “ready to punish” Assad for using the chemical weapons, citing a 2005 U.N. provision for international action to protect civilians from their own governments.

Similar arguments were used by NATO to bomb Serbia, a Russian ally, in 1999 after the killing of civilians in Kosovo.

In an indication of support from Arab states that may help Western powers argue the case for an attack against likely U.N. vetoes from Moscow and Beijing, the Arab League issued a statement blaming Assad’s government for the chemical attack.

Fears of another international conflict in the Middle East affected financial markets. Oil prices hit a six-month high and stocks fell around the world, notably in Turkey, as well as in emerging economies that would suffer from a chill in trade.

Obama, Cameron and Hollande face questions at home about how a military intervention would end and whether it risks bolstering Assad if he rides out the assault or empowering anti-Western Islamist rebels if the Syrian leader is overthrown.

Turmoil in Egypt, where the 2011 uprising inspired Syrians to rebel, has underlined the unpredictability of revolutions. The presence of Islamist militants, including allies of al Qaeda in the Syrian rebel ranks, has given Western leaders pause. They have held back so far from helping Assad’s opponents to victory.

“We have means of defending ourselves, and we will surprise them with these if necessary,” he said. “We will defend ourselves. We will not hesitate to use any means available.”

Assad’s forces made little or no response to three attacks by Israeli aircraft earlier this year that Israeli officials said disrupted arms flowing from Iran to Lebanon’s Hezbollah.

The presence of U.N. experts in Damascus may be a factor holding back international military action. The experts came under fire in government-held territory on Monday before reaching rebel lines. They interviewed and took samples from survivors of the chemical attack, though much evidence may have decayed.

Opposition activists have said at least 500 people, and possibly twice that many, were killed by rockets carrying the nerve gas sarin or something similar. If true, it would be the worst chemical weapons attack since Saddam Hussein gassed thousands of Iraqi Kurds in 1988.