Pitting champions against champions, the finals gave contestants a center stage during the event held in collaboration with ‘Gumball 3000, The Middle East festival,’ which marked the launch of the 2022 rally. Each of the athletes were battling it out for the unique opportunity to be crowned the undisputed Urbanball GCC Fightball King.

The supercar road rally from ‘Gumball 3000 ’came to the Middle East for the very first time. To celebrate the occasion, Ex Sports subsidiary Urbanball partnered with Gumball 3000 ‘The Middle East’, for a day of speed and skill.

Read: EX-Sports and Gumball to host supercar and street football event in Dubai

Match 1 saw the youngest athlete in the finals, Saudi Arabia Champion Zaid Sharif, beat Hamad Abdullah, the Champion of Bahrain in a close semi-final. Joining him in the final was Mohamed Hatim, after the Champion of Qatar overcame UAE Champion Artin in the second semi-final. In a thrilling final it was to be Qatar’s Hatim who would eventually come out on top after he got the better of Saudi Arabia’s Hamad. 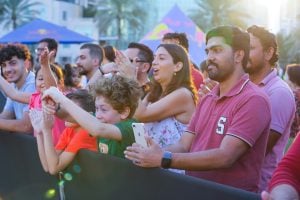 While Hatim rightly took the glory as he earned his place as the GCC Fightball King 2022, all of the finalists will have their NFTs minted and become in-game players in the upcoming play-and-earn Urbanball street football game.

Aside from the action-packed finals, the fans were treated to a supermatch between world panna champion Mehdi Amri and the up-and-coming challenger, Victor Louis, a highly talented freestyle footballer from France.

Another treat for the audience saw Urbanball CEO and street football superstar Sean Garnier call the UAE’s own adrenaline seeking Nasser Al Neyadi out of the crowd in a fun challenge. Well known to be a sports enthusiast and live by the phrase ‘be awesome’, Sheikh Nasser readily accepted the challenge and was happy to take on Sean in an exhibition match to the fans delight.

The special appearances didn’t stop there, though. Viral YouTube superstar and one of the Gumball 3000 Middle East drivers, Yung Filly, teamed up with UAE freestyle champion Ammar for a 2v2 match against Sean Garnier. 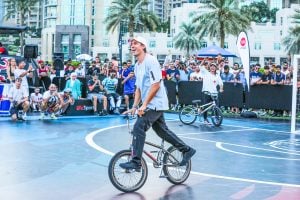 With the weekend of supercars and superstars dubbed an extravaganza of sport, the entertainment went beyond street football. Red Bull UAE, the activation partners of the event, invited six-time World BMX Flatland Champion, Viki Gomez from Spain, to showcase some of his skills.

With the Gumball 3000 2022 rally setting off from Dubai the day after the Urbanball GCC Qualifier finals, some of the most exclusive supercars in the world were also on show, parked up around the urbanball pitch against the backdrop of the Burj Khalifa. On Sunday November 13, Urbanball CEO Sean Garnier and many of the other athletes in attendance joined the Gumball 3000 2022 Middle East flag drop, which saw each of the 100 supercars begin their journey.

Among the many special guests in attendance were Red Bull athlete Ahmad Daham. Also in attendance were Lukas Marques and Daniel Mologni, the hosts of Voce Sabia, Brazil’s 3rd largest YouTube channel with over 40 million subscribers, as well as Middle Eastern influencer, @5K. Many of the Gumball 3000 superstar drivers were present as well, including French Montana, Shmee, Michael Dapper and many more.