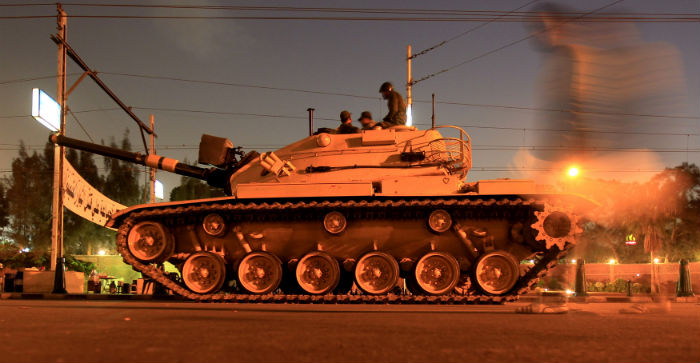 Nine people were hurt when unknown attackers fired at protesters camping at Tahrir Square in central Cairo on Tuesday, according to witnesses and Egyptian media, as opponents and supporters of President Mohamed Mursi’s plans to vote on a new constitution geared up for a day of street demonstrations.

Police cars surrounded the square, the first time they had appeared in the area since Nov. 23, shortly after a decree by the Islamist president giving himself sweeping temporary powers touched off widespread protests.

The attackers also threw petrol bombs which started a small fire, witnesses said. Many of the protesters, awakened by the noise, chanted: “The people want the downfall of the regime.” Recorded recitations of the Koran were played over speakers in the square.

Leftists, liberals and other opposition groups have called for marches to the presidential palace in the afternoon to protest against the hastily arranged referendum on a new constitution planned for Saturday, which they say is polarising the country.

Islamists, who dominated the body that drew up the constitution, have urged their followers to turn out “in millions” the same day in a show of support for the president and for a referendum they feel sure of winning and that critics say could put Egypt in a religious straitjacket.

The elite Republican Guard has yet to use force to keep protesters away from the palace, now ringed with tanks, barbed wire and concrete barricades, but a decree issued by Mursi late on Sunday gives the armed forces the power to arrest civilians during the referendum and until the announcement of the results.

Leftist politician Hamdeen Sabahy, one of the most prominent members of the National Salvation Front opposition coalition, said Mursi was driving a wedge between Egyptians and destroying prospects for consensus.

As well as pushing the early referendum, Mursi has angered opponents by taking sweeping temporary powers he said were necessary to secure the country’s transition to stability after a popular uprising overthrew autocratic former president Hosni Mubarak 22 months ago.

“The road Mohamed Mursi is taking now does not create the possibility for national consensus,” said Sabahy.

If the constitution was passed, he said: “Egypt will continue in this really charged state. It is certain that this constitution is driving us to more political polarisation.”

The opposition says the draft constitution fails to embrace the diversity of 83 million Egyptians, a tenth of whom are Christians, and invites Muslim clerics to influence lawmaking.

But debate over the details has largely given way to noisy street protests and megaphone politics, keeping Egypt off balance and ill equipped to deal with a looming economic crisis.

Lamia Kamel, a spokeswoman for Moussa, said the opposition factions were still discussing whether to boycott the referendum or call for a “no” vote.

“Both paths are unwelcome because they really don’t want the referendum at all,” she said, but predicted a clearer opposition line if the plebiscite went ahead as planned.

Mahmoud Ghozlan, the Muslim Brotherhood’s spokesman, said the opposition could stage protests, but should keep the peace.

“They are free to boycott, participate or say no; they can do what they want. The important thing is that it remains in a peaceful context to preserve the country’s safety and security.”

The army stepped into the conflict on Saturday, telling all sides to resolve their disputes via dialogue and warning that it would not allow Egypt to enter a “dark tunnel”.

The continuing disruption is also casting doubts on the government’s ability to push through tough economic reforms that form part of a proposed $4.8 billion IMF loan agreement.