In August this year, Sheikh Mohammed bin Rashid Al Maktoum, Vice President and Prime Minister of the UAE and Ruler of Dubai, made a bold statement when he confirmed that the next priority of the UAE is to increase the contribution of the digital economy in the national economy.

The digital economy’s contribution to the UAE’s GDP in 2019 already reached 4.3 per cent demonstrating the strength of a country and its economy that is prepared to spread commit fully to its digital transformation.

Preparing for a digital economy also requires an enormous skilled workforce equipped for the challenges and the opportunities that this new-age economy will create. Keeping this in mind the University of Wollongong in Dubai (UOWD), the oldest foreign university in the UAE, has now rolled out three new degree programmes in Computer Science, namely in cybersecurity, big data and game and mobile development

All the three STEM programmes are 4-year full-time courses. The programme leader for these courses is Dr Hock Chuan Lim, who obtained a PhD from the University of New South Wales in Australia and has previously worked as a lead instructor game programming in Canberra. 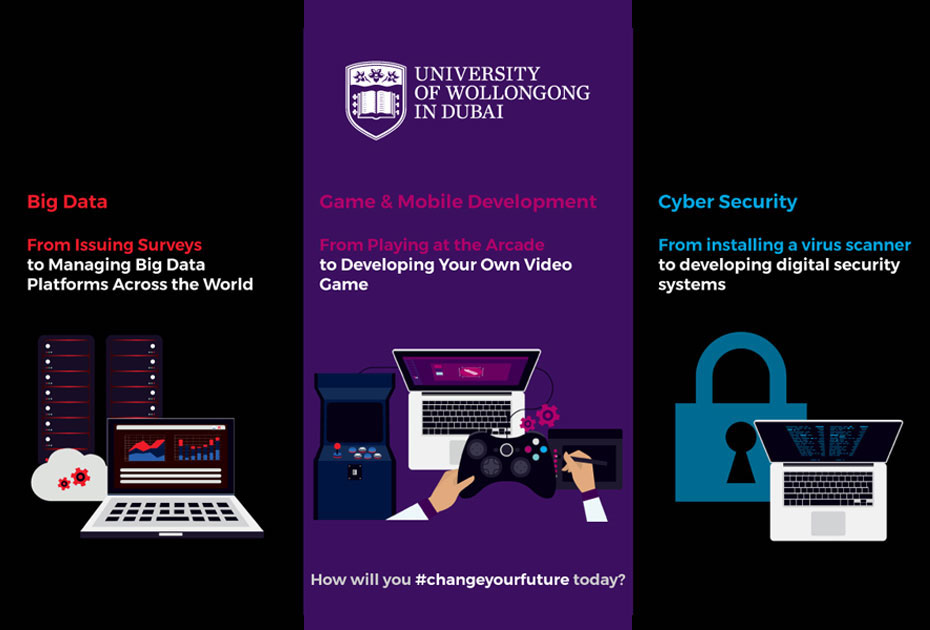 According to market and research consulting firm, MarketsandMarkets, careers in big data are among the fastest-growing roles in 2020, with the global big data market forecasted to leap from a value of $138.9bn in 2020 to $229.4bn by 2025, at a CAGR of 10.6 per cent. UOWD’s Bachelor of Computer Science in Big Data degree will open up career opportunities across disciplines including business intelligence engineers, data analysts, big data architects and machine learning engineers.

Meanwhile, a highly sought-after specialization, cybersecurity, will be addressed through the Bachelor of Computer Science in Cyber Security programme that prepares students for careers such as network security engineers, forensic analysts and security architects. Reinforcing the need for skilled personnel in this area, consulting firm Market Insights, predicted that the cybersecurity market will grow at a CAGR of 1 per cent until 2026, reaching a market valuation of $400bn by that year. In another recent survey of industry leaders, it was found that 68 per cent of responding organisations struggled with recruiting, hiring, and retaining cybersecurity talent. Worryingly, 73 per cent of surveyed organisations had experienced at least one intrusion over the past year that could be partially or wholly attributed to the cybersecurity skills gap.

Apart from big data and cybersecurity, gaming has seen exponential growth over the last few years. It is estimated that there are currently more than 2.7 billion gamers across the globe, a two-fold increase in just five years. Also, the global gaming industry is now considered to be larger than the TV, movie, and music industries combined. In 2019, the gaming industry generated revenues of over $145.7bn according to Newzoo, eclipsing global box office ($43bn) and record music ($19bn) revenues. UOWD has timed the introduction of its Bachelor of Computer Science in Game and Mobile Development perfectly, as the course structure is aimed at training students for careers such as mobile app developers, video game designers, programmers, and animators, among others.

This year, UOWD opened its new 200,000-square-foot Campus of the Future in Dubai Knowledge Park and introduced a hybrid approach to learning.

The three new STEM programmes are fully accredited and recognized by the UAE Ministry of Education – Higher Education Affairs. In addition, these programmes are registered with the Tertiary Education Quality and Standards Agency (TEQSA), Australia’s national regulator for higher education. UOWD graduates, therefore, can exchange their UOWD degree for the equivalent of a UOW Australia degree upon completion.

“As the demand from the global workforce evolves to keep pace with the changing landscape, it is crucial for students to graduate with a technological mindset and competitive advantage. Our new STEM programmes are industry-specific and equip students with key knowledge and skills to pursue careers in technical fields such as cloud security engineering, data mining, software development and statistics, to name a few. Cybersecurity, big data and game development are industries that are booming and there is an increased demand for skilled professionals to take up roles in both the public and private sectors,” reiterates Professor Mohammed Salem, president of UOWD.