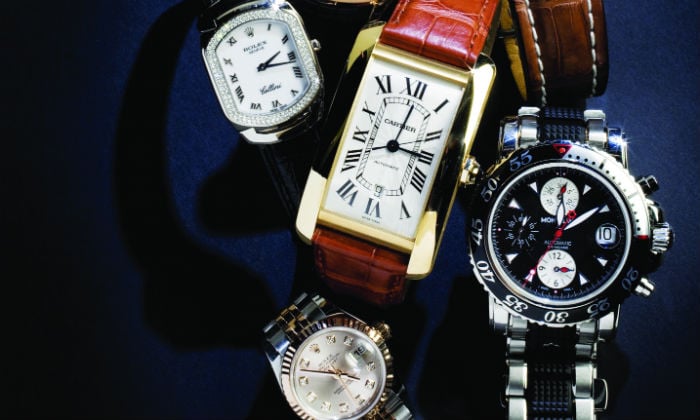 The profligacy of heavy spending was brutally clipped with the onset of the global economic slowdown. As governments, companies and individuals tightened their pockets, liquidity became scarce and indulgences stumped.

To no one’s surprise, the luxury market contracted by over nine per cent in 2009.

But the appetite of the rich slowly returned. Though not as decadent as in the previous decade, it drove double-digit growth in the luxury segment. In the UAE alone, the luxury market grew, and even this year — according to Euromonitor International — it is expected to rise more than nine per cent to a total of Dhs7.1 billion. The primal thrust is coming from hard luxury items like real jewellery, handbags, sunglasses and watches.

However, beneath the veneer of glitzy diamantes and Swarovski-embedded dials, lies the harsh reality of survival of the fittest. The 400-odd watch industry players know that in order to be in the game, let alone thrive in it, they have to judiciously earmark their watches not as mere products but as horological icons.

“It is not a volume game. You need visibility, exclusivity, desirability and worldwide distribution to survive. Being a niche to boutique brand is ideal,” said Manuel Emch, CEO, RJ-Romain Jerome.

Edging its way into a saturated market eight years ago was no mean task for the Swiss-based watch company. Emch was quick to realise that craftsmanship, know-how, design and technological expertise were inadequate to subsist. So RJ the “DNA of famous legends” — timepieces that contained pieces of steel recovered from the Titanic and Apollo 11 space shuttle, copper from the Statue of Liberty, moon dust mingled with silver, and even the Icelandic volcanic lava.

Emch’s prior stint with The Swatch Group took the company from an annual turnover of CHF 200,000 to CHF 35 million in ten years. That same determination has crossed over to RJ where the company has posted consistent growth.

“We are profitable, which is rare in this economic scenario, especially for a newer watch brand as we have to spend up to 10 per cent on R&D and up to 20-25 per cent on marketing.”

Key to this progress is RJ’s continued focus on its target markets of Europe and the Middle East.

“The Middle East was one of our first markets because people here are product and brand sensitive. Over 15 per cent of our global turnover comes from the region, although this market usually counts for five to eight per cent of the global luxury turnover.”

It’s surprising to hear that RJ’s biggest markets are European —Switzerland and France — unlike US or China as for most luxury companies. “Even though Europe is a complex and difficult market, it is lucrative as cost-to-market is low and our retailer relationships are strong.”

Emch is not quite as optimistic for the future though: “In 2013, for the first time in my career, I see continuing anxiety, unpredictability, lack of a definitive trend, and this will make it a very challenging year. The luxury industry will not see much growth.”

The biggest change for the watch industry, according to Emch, will come from accelerating consolidation, especially in supply and distribution.

“With constricted supply, distribution will become more expensive, leading to decontrol of the value chain, all in a very unstable economic environment.

Hence, only the highly structured big or independent players that do tailor-made pieces will likely survive.”