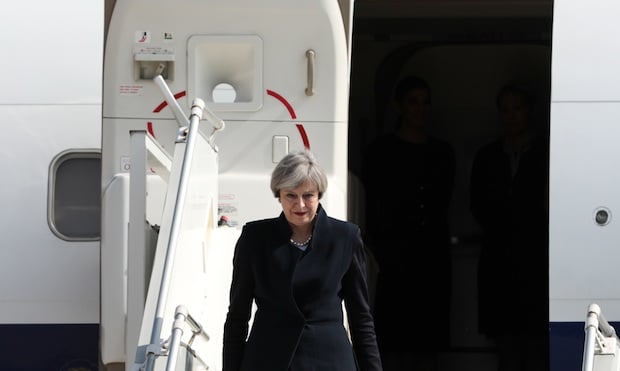 British Prime Minister Theresa May said on Tuesday she would raise “hard issues” with Saudi Arabia’s leaders on a visit to the country, as critics urged her to pressure Riyadh over its air war in Yemen and human rights record.

May also said she was appalled by reports of a chemical weapons attack in northern Syria that killed dozens of people, including 11 children, and called for a prompt investigation.

She was expected to explore ways of boosting trade with the kingdom during the two-day visit, her second to a Gulf Arab state since Britain voted to leave the European Union. Saudi Arabia is the country’s largest Middle East trading partner, with British exports worth GBP6.57bn ($8bn) in 2015.

May, who has launched a drive to secure trade deals after launching divorce proceedings with the EU, said she would stand up for both human rights and Britain’s national interests in her talks in the world’s top oil exporter.

Saudi Arabia is a major customer for British defence companies and an ally in the fight against Islamist militancy.

Britain’s supply of aircraft and weapons has come under scrutiny because of the war in Yemen. A Saudi-led coalition of Arab states has launched thousands of air strikes in an effort to dislodge Iranian-aligned Houthis from the capital Sanaa and restore President Abd-Rabbu Mansour Hadi to power.

The two-year-old civil war has killed more than 10,000 people, half of them civilians.

“We have no difficulty in raising hard issues with those that we meet with, be it in Saudi Arabia or elsewhere around the world,” May told reporters in Jordan before heading to Riyadh where she is expected to meet Crown Prince Mohammed bin Nayef.

May, who landed in Riyadh on Tuesday, will be joined by the chief executive of the London Stock Exchange for a financial roundtable at the kingdom’s bourse.

The London Stock Exchange is among those pitching to win a piece of state oil company Saudi Aramco’s initial public offering, which is expected to be the world’s largest.

May has come under fire over her foreign trips since becoming prime minister last year. She was accused of failing to challenge U.S. President Donald Trump and Turkish President Tayyip Erdogan earlier this year.

The leader of the opposition Labour Party, Jeremy Corbyn, said May must put human rights and international law at the centre of her talks with the Saudis.

“Unless the prime minister challenges the Saudi regime over its abuses this week, it will be clear she is ready to sacrifice human rights and security on the altar of the arms trade,” he said in a statement.

May attended the annual Gulf Arab summit in Bahrain in December to cement ties with oil producers.

“Britain is introducing itself to countries of the region in its new form,” said Abdulaziz Sager, chairman of the Jeddah-based Gulf Research Center. “This means that Britain will be in direct competition with European Union powers and that it presents itself as an alternative to them.”

May must try to strengthen her hand in talks with the EU without annoying its leaders and secure trade deals elsewhere in case the talks fail and Britain crashes out of the bloc without an agreement.

“I want to see the United Kingdom as a truly global Britain,” May said. “A good continuing deep partnership with the European Union, but also trading and working with others around the world.”