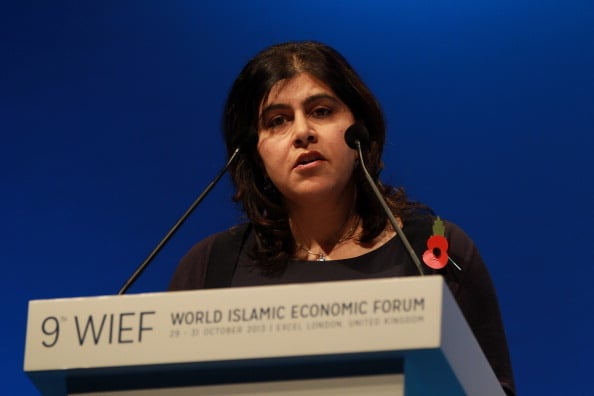 While the British government has repeatedly called for an immediate ceasefire in Gaza, Cameron has come in for criticism from political opponents and some members of his own party for what they say has been his reluctance to condemn Israel’s actions in stronger terms.

Warsi announced her decision as Israel pulled its ground forces out of the Gaza Strip and started a 72-hour ceasefire with Hamas mediated by Egypt as a first step towards negotiations on a more enduring end to the month-old war.

Gaza officials say the war has killed 1,865 Palestinians, most of them civilians. Israel says 64 of its soldiers and three civilians have been killed since fighting began on July 8, after a surge in Palestinian rocket launches.

Warsi’s resignation is embarrassing for Cameron, who has been accused of filling his government with too many middle-class white males. Warsi was not a full cabinet member but had the right to attend and played an important role in mediating between the government and Britain’s Muslim community.

Warsi, a baroness who sits in the upper house of parliament, in 2010 became Britain’s first Muslim to serve in cabinet but was later demoted to be a senior minister of state at the Foreign Office and a minister for faith and communities.

She announced her resignation on Twitter, publishing a copy of a letter she sent Cameron with the reasons for her decision.

“Our approach and language during the current crisis in Gaza is morally indefensible, is not in Britain’s national interest and will have a long term detrimental impact on our reputation internationally and domestically,” Warsi, 43, said.

Cameron, who is holidaying in Portugal with his family, said he had been sorry to receive her letter and regretted that they had not been able to speak about her decision beforehand.

“Israel has the right to defend itself. But we have consistently made clear our grave concerns about the heavy toll of civilian casualties and have called on Israel to exercise restraint,” he wrote in response. “We have consistently called for an immediate and unconditional humanitarian ceasefire.”

Foreign Secretary Philip Hammond defended the government and said he had been surprised by the timing of Warsi’s decision, given that some progess was now being made in Gaza.

“To my colleagues who say can you do a bit more megaphone diplomacy over here or over there, offend one side or the other side a bit more, I say it is more important to achieve the result which I think we all want to see which is an end to the killing,” he said.

Britain’s response to the events in Gaza was one of the factors behind the radicalisation of British Muslims, Warsi said, citing early evidence from the Home Office. That could have consequences for years to come, she said.

Opposition Labour leader Ed Miliband told the BBC: “Cameron needs to come out much more clearly and say Israel’s actions … are just wrong and can’t be defended and can’t be justified.”

Warsi voiced her support for the people of Gaza in several comments on Twitter over the last month, saying the Palestinians needed a “viable and secure” state. She had called for the killing of civilians to stop.

Speaking in an interview with the Huffington Post after the announcement, Warsi said she “couldn’t sit silently by as the Israeli military committed acts that have been described by (U.N. Secretary-General) Ban Ki-moon as ‘moral outrages’ and ‘criminal acts'”.

In her role as a foreign office minister, Warsi held specific responsibility for government policy on Afghanistan, Pakistan and Bangladesh. Born in northern England, she is the daughter of Pakistani immigrants to Britain and speaks fluent Urdu, Punjabi and Gujarati.