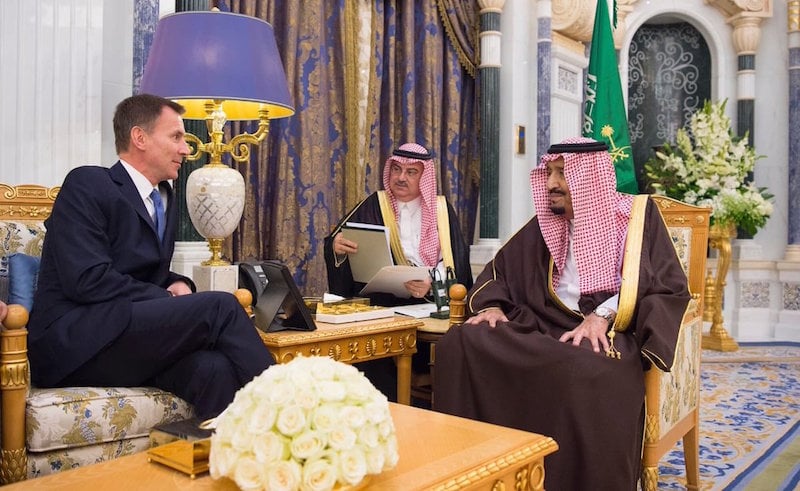 British foreign minister Jeremy Hunt on Tuesday said prospects for talks to end Yemen’s war were “more real” after Saudi Arabia confirmed to him its willingness to evacuate 50 wounded Houthi fighters as a confidence-building measure.

Following meetings in Riyadh with the Saudi king and crown prince – the main proponent of Saudi military intervention in Yemen – Hunt also said he anticipated “rapid progress” in bringing to justice those responsible for last month’s murder of journalist Jamal Khashoggi.

“I was led to believe that certainly the legal processes are going to be starting very soon indeed and we should hear something about that quite shortly,” Hunt told Reuters in an interview.

The Western-backed Saudi-led coalition in Yemen resumed air strikes on the main port city of Hodeidah after a lull on Monday as Western allies pressed Riyadh to end a war that has pushed the impoverished country to the verge of starvation.

“Even though there’s been a temporary lull in the fighting, … it is a desperate humanitarian situation and so I impressed on everyone the urgency of the situation we’re facing,” Hunt said.

Britain is a major arms supplier to Saudi Arabia, and opposition politicians and human rights groups have called on the government to cease such sales.

The government has said the arms sales earn Britain billions of pounds and guarantee jobs in the industry, and its response to the Khashoggi killing must bear this in mind.

Britain has pushed for new action at the United Nations Security Council to try to end hostilities in Yemen and find a political solution to the war.

The evacuation of Houthi fighters, which Hunt said would have conditions about who travels with them, was a Houthi condition for peace talks that collapsed in September after the armed group’s delegation failed to show up.

“If this unblocks that, then that makes the prospect of those peace talks happening more real and that will be very important,” Hunt added. “It’s about confidence-building measures on both sides, but certainly (from) the people I’ve spoken to today, there is a real willingness to engage in those.”

The murder of Khashoggi, a Washington Post contributor and critic of Prince Mohammed, has provoked little concrete action by world powers against Saudi Arabia, the world’s largest oil exporter and a supporter of Washington’s plans to contain Iranian influence across the Middle East.

Britain has called for a “credible” investigation. Hunt, the first British minister to visit Saudi Arabia since the killing, said its results had to be reviewed before deciding on any consequences.

“I talked very frankly about our concerns about what happened and how important it is for Saudi’s strategic partners to know that this cannot and will not happen again,” he said.

“Due process is in train at the moment in Saudi Arabia, and I was led to believe there will be rapid progress in making sure that people are brought to justice,” he said.

Hunt said accountability was needed for both the people who committed the act and those who ordered it.

After initial denials, Saudi officials acknowledged the killing was planned in advance but said the crown prince had no knowledge of the specific operation.

Erdogan said on Saturday that Turkey had given recordings related to the killing to countries including Britain.

Asked about the recordings, Hunt declined to comment on intelligence matters but said: “My understanding of what actually happened is not dissimilar to what I’ve been reading about in the newspapers.”