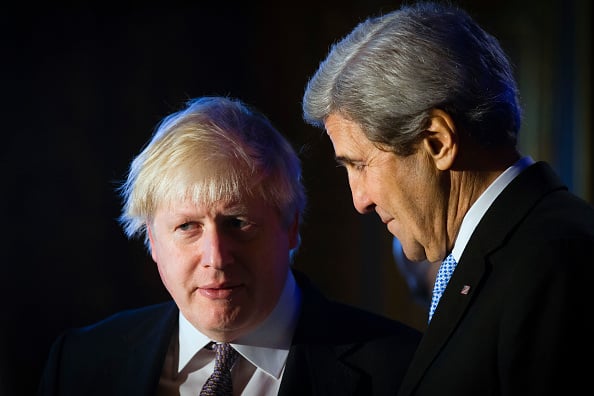 Johnson was speaking at a conference in Bahrain a day after footage was published of him accusing Saudi Arabia, an important ally for Britain, and Iran of stoking proxy wars across the Middle East.

Johnson, known for a tendency to go off-script, said in Rome last week that the absence of real leadership in the Middle East had allowed people to twist religion and engage in proxy wars.

Johnson on Friday made no direct reference to those remarks, which Prime Minister Theresa May’s spokeswoman said did not reflect actual policy. He instead portrayed a Britain readier than ever to defend, and trade with, its energy-rich Gulf friends.

“Any crisis in the Gulf is a crisis for Britain from day one. Your security is our security,” he told security chiefs at the Manama Dialogue conference, underlining a message May presented at a Gulf Arab summit earlier in the week.

Britain and the six monarchies of the Saudi-led Gulf Cooperation Council said in a joint communique at that summit that they intended to build on trade that stood at GBP30bn ($38bn) in 2015, and work to remove barriers to investment.

“We’ll still be there to stick up for our friends and partners in the Gulf … But now for the first time since the 1970s we will additionally be able to do free trade deals and we’ll be able to build on the extraordinary commercial relationships that already exist between the UK and the Gulf.”

Britain has 1,500 military personnel and seven warships in the region – a force Johnson said was larger than any other Western navy in the area apart from the United States.

Britain’s close ties with the Gulf States has drawn concern from rights groups, particularly over Saudi air strikes in Yemen which have killed hundreds of civilians.

British military personnel have been involved with advising the Saudi forces as they lead an Arab military coalition against the Iranian-backed Houthis in Yemen’s civil war.

Johnson lamented as a mistake Britain’s 1968 decision to shut its Gulf military bases, which had helped anchor its global empire for more than a century, and said Britain now sought to restore the influence he suggested it had lost in the decades since.

“Britain is back east of Suez, not as the greatest military power on earth … but as a nation that is active in and deeply committed to the region.”