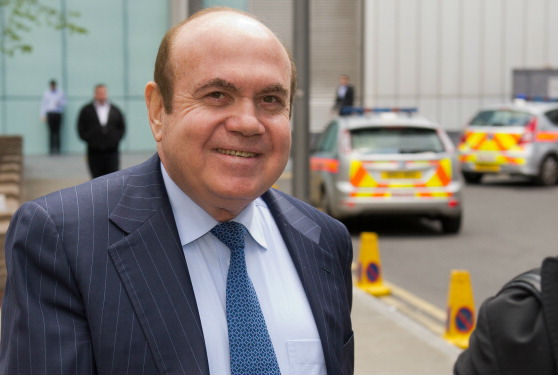 A British prosecutor alleged on Tuesday that London-based businessman Victor Dahdaleh made “corrupt payments” of over 40 million pounds ($63 million) to the former chairman and chief executive of a Bahraini aluminium smelter to secure contracts worth over $3 billion for companies including U.S. group Alcoa.

Dahdaleh, 70, who holds dual Canadian and British citizenship, has pleaded not guilty to the seven charges of corruption and one of transferring criminal property which were brought by Britain’s Serious Fraud Office.

Britain’s top fraud agency has a lot at stake in the trial after a series of setbacks in other cases and because of the scale of the allegations.

The accusations of high-level corruption in Bahrain, between 1998 and 2006, also come at a sensitive time for the Gulf state, a Western ally whose Sunni ruling dynasty has been dogged by sporadic protests by the Shi’ite majority.

Dahdaleh’s lawyer made no comment on Tuesday and the defence will be presented later in the trial.

Prosecutor Philip Shears told the jury that Dahdaleh’s defence would be that the payments were “sponsorship” in line with Bahraini “custom and practice”.

“This case is about corruption. It is corruption, as we will suggest, on a very large scale,” Shears said. “The rewards to Mr. Dahdaleh were enormous.”

The businessman was accused of having made hundreds of millions of dollars by acting as a middleman between the then chairman of smelter Alba – a member of Bahrain’s royal family – and a number of supplier companies, including Alcoa.

Alcoa is not accused of wrongdoing and is not a party to the case. The company would make no comment, a spokeswoman said in an email.

Hall has pleaded guilty to a charge of conspiracy to corrupt and accepted that he was part of a criminal conspiracy with Sheikh Isa and Dahdaleh, Shears said. Hall will be the first prosecution witness in Dahdaleh’s trial.

Britain has no extradition treaty with Bahrain and no way to compel Sheikh Isa to come to court, Shears said. Sheikh Isa is named as a co-conspirator with Dahdaleh in count one of the indictment, which is the main count of conspiracy to corrupt.

He is also named in counts two, three and four as the recipient of corrupt payments made by Dahdaleh.

Shears said Dahdaleh had used his influence with Sheikh Isa to facilitate contracts between Alba and suppliers so that he could personally benefit from them. The biggest such contract was between Alba and its long-term supplier of the key raw material alumina, U.S. giant Alcoa.

Shears said Dahdaleh did not dispute that the payments to Sheikh Isa and Hall were made but said they were a form of “government sponsorship” or tax and were part of the custom and practice of Bahrain.

The trial, which is expected to last until late January, will hear evidence from senior Bahraini figures including the current chairman of Alba.