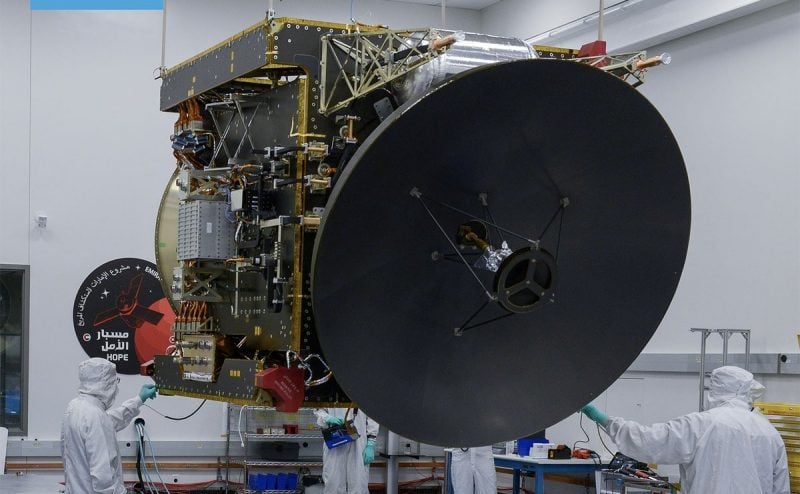 In a joint statement, the two organisations confirmed that most of the main parts of the project have been completed and are currently undergoing intensive testing to ensure every aspect of the probe is ready for activation a few months before the launch date.

Set to be the Arab region’s first unmanned mission to Mars, the Hope probe is scheduled to launch to the red planet in July 2020. It is expected to arrive in Mars seven months later in 2021 to coincide with the 50th anniversary of the founding of the UAE.

With less than 500 days remaining for the launch, the probe’s systems and components, as well as its ability to communicate with the ground station have been checked by the team, a statement said.

The @UAESpaceAgency and the @MBRSpaceCentre have announced that 85% of the Hope Probe project has been completed. It is planned to reach Mars by 2021, with less than 500 days remaining for the launch. https://t.co/eJcN6lQ7gK pic.twitter.com/WGBvDpbJgb

Several aspects related to the design, assembly of the structure, cameras and control have also been verified.

The probe has “succeeded in all the tests it has been subject to so far”, ahead of the five environmental tests to be conducted from June to December 2019.

“These devices are key to achieving the objectives of the scientific mission, which is a deeper and wider understanding of the Martian atmosphere, and the study of climate change and its relationship to atmospheric erosion, which was one of the reasons for the disappearance of liquid water from the surface of the planet,” the statement explained.

The project will also mark the first time that a global picture will be taken of the Martian atmosphere. An integrated picture of the atmosphere throughout the day and for a long period of time will help capture data on the planet’s atmosphere in different seasons across the year. This data will be made available to the global community.

Ahmad Belhoul Al Falasi, minister of State for Higher Education and Advanced Skills and chairman of the UAE Space Agency, said: “The Emirates Mars Mission’s Hope Probe is almost complete. The UAE is on the verge of making history, after turning its dream of becoming the first Arabic and Islamic country to send a spacecraft to Mars into reality.

“The UAE, through this ambitious project, has positioned itself amongst the leading countries in the field of space exploration and advanced space manufacturing. The project has so far showcased the level of capabilities and world-class facilities that are available in the UAE.”

Mohammed Nasser Al Ahbabi, director general of the UAE Space Agency, added: “The next and final stage, prior to the probe’s launch, will involve testing the probe’s readiness to operate in outer space. This is an important step towards the successful conclusion of the probe’s development, as extensive testing will allow us to optimise the probe and ensure its systems are fully operational.”

The Hope probe project is being implemented by the MBRSC, with the UAE Space Agency funding and supervising procedures.