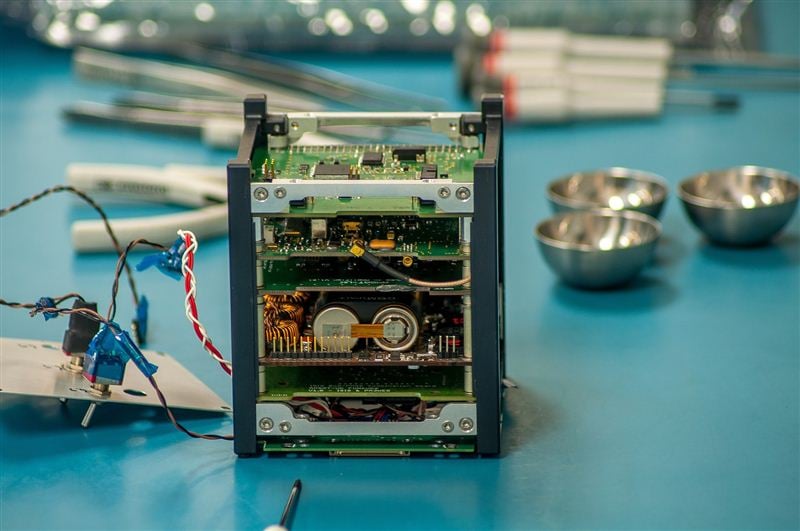 The UAE’s first nanosatellite has been successfully launched into outer space.

Nayif-1 was launched on the PSLV-C37 rocket, from Satish Dhawan Space Centre in Sriharikota, India at 7:58am UAE time.

It was the fifth of 104 satellites separated from the launch, which had the highest payload of satellites ever recorded.

The satellite is a joint project between the Mohammed bin Rashid Space Centre (MBRSC) and the American University of Sharjah (AUS), with support from nanosatellite developer Innovative Solutions in Space, and is designed to give Emirati engineering students experience of designing, building, testing and operating nanosatellites.

It is the first 1U nanosatellite programmed to transfer messages in Arabic.

“With the launch of the new satellite, we are confident that we are on the right path for achieving new scientific breakthroughs with the efforts of UAE citizens,” said His Highness Sheikh Hamdan bin Mohammed bin Rashid Al Maktoum, Crown Prince of Dubai and chairman of Mohammed Bin Rashid Space Centre

The first signal from Nayif-1 was received 18 minutes and 32 seconds after it reached orbit at AUS where the ground station is based. And the satellite will be operated and controlled.

Fatma Lootah, deputy project manager of Nayif-1 at MBRSC said the team would continue to monitor the satellite’s direction and control in its subsequent passes, which will occur four times a day.

The satellite, which was launched into a sun synchronous orbit about 512km above the Earth, will later be switched to autonomous mode.

The project’s missions includes sending and receiving text messages on amateur radio frequencies,characterising and validating the accuracy of the satellite’s in-situ temperature measurements in space and determining the evolution of the solar cell’s performance in space during its design life.

Director General of MBRSC HE Yousuf Al Shaibani said the launch was the first as part of a strategy to introduce space projects to university students.

It took about a year and a half in total and was carried out at MBRSC under the supervision of engineers and specialists.

In another space initiative this week, the UAE announced plans to establish a mini city on Mars.

The country is also planning to become the first Arab country to launch a mars probe in 2021.