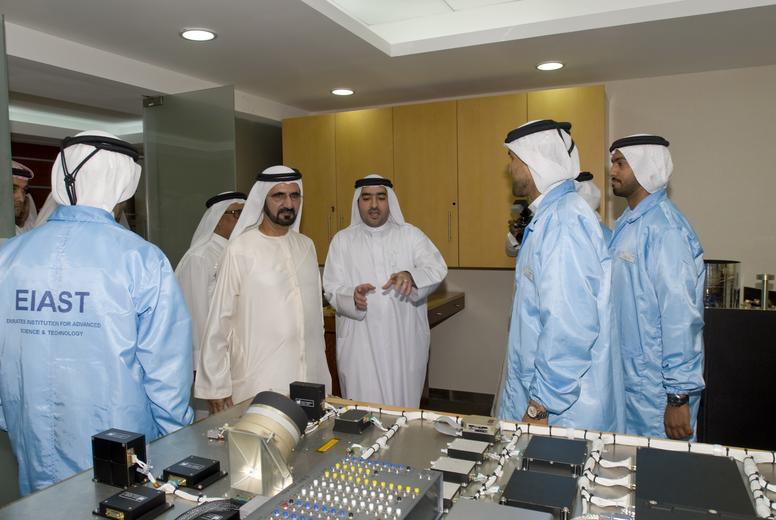 The UAE’s first satellite built completely by nationals is expected to enter orbit by 2017.

Named Khalifa Sat, the first Arab-made satellite will be entirely manufactured by competent experts from the UAE, said the report.

Launching the project at the Emirates Institution for Advanced Science and Technology (EIAST), Sheikh Mohammed said “Khalifa Sat is a message to all Arabs that Arab ushering into the space era is neither out of reach nor impossible and our state will be a leader in this industry as long as we have the confidence and courage to enter into competition with major countries in this field.”

“Our doors will remain open for cooperation with all Arab countries in space technology and engineering,” Sheikh Mohammed added.

“We are extremely delighted at seeing sons and daughters of the UAE forming the first Arab team to build a satellite and launch it into outer space in 2017… Our confidence in them is boundless and our ambitions are the sky’s the limit and success comes from Allah,” WAM quoted him as saying.

He added: “Excellence of our youth in space sciences, engineering and energy opens before our state new huge development prospects and new avenues which will have set foot for the first time.”

Sheikh Mohammed also said that he would personally follow up on the Khalifa Sat work team, revealing that the government will set up similar teams in other fields.

At EIAST, a national team of 45 engineers and experts are currently establishing advanced facilities and high-tech laboratories for building a humidity and dust-proof satellite.

During the visit, Sheikh Mohammed viewed plans and designs of the facilities for building satellites in 2015.