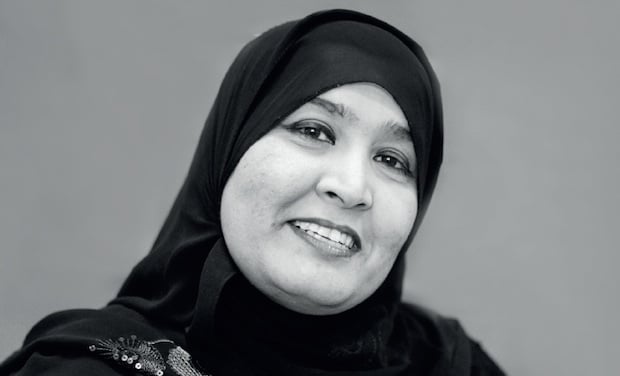 When Thuraya Al Zaabi suffered a stroke at the age of 29, which led to temporary paralysis and loss of speech, along with permanent paralysis down her left side, she had a decision to make: allow it to adversely dictate her future or find a way to work around it. She chose the latter.

Now an ambassador for the Paralympics in the UAE, Thuraya admits that the period after the stroke was “gloomy” but her determination, love of life and family encouraged her to “surmount the challenges” she faced as a result of the stroke.

“My right to live normally converted this disability into a catalyst for me to adapt to all circumstances and turn all the negative aspects in my life to positive ones,” says the mother-of-four.

“It is all about retaining hope and throwing the despair away.”

Soon after joining the Al Thiqah Club for Handicapped in Sharjah for rehabilitation, Thuraya watched a number of sportswomen receive awards and recognition for their sporting achievements. This, she says, triggered nostalgia for her days in college when she excelled in handball, volleyball, basketball and running.

While Thuraya did not compete in those days due to her decision to start a family, her passion for playing never left her. One year after her stroke, at the recommendation of the Al Thiqah Club, she turned her hand to javelin, discus and shot-put, and started competing in regional competitions.

Thuraya’s sporting prowess had by no means waned, and in 2008 she became the first female Emirati athlete to participate in the Paralympics, the first time the UAE had allowed a woman to represent the country at the Paralympic Games. She followed that up with gold medals in javelin and shot-put at the 2010 Asian Games in Guangzhou.

What makes a successful sportswoman? “Confidence, hope and determination,” says Thuraya. “The beginning was tough. I went through a harsh period where I stayed at home motionless all the time. But I gradually regained my self-confidence and acclimatised myself to my new life.”

When Thuraya returned to sport following her stroke, she was just one of three women with disabilities competing in sport. That number has since increased to about 15 and the gold medalist is delighted.

“The UAE exerts tremendous effort in strengthening the role and participation of women in all sporting fields,” says the Paralympian.

“With the encouragement from our wise leadership, the opportunities available for the next generation are undoubtedly bigger and wider. Anyone who works hard will reach their goal.”

What next for Thuraya Al Zaabi, an ardent supporter of her country and the people in it? “For me, I hope to compete in more games in the future.”

Extract from the book The UAE’s Inspiring Women – Emaratiyah put together by the Federal Competitiveness and Statistics Authority (FCSA) to celebrate Emirati Women’s Day this year. The book was published in association with Motivate.