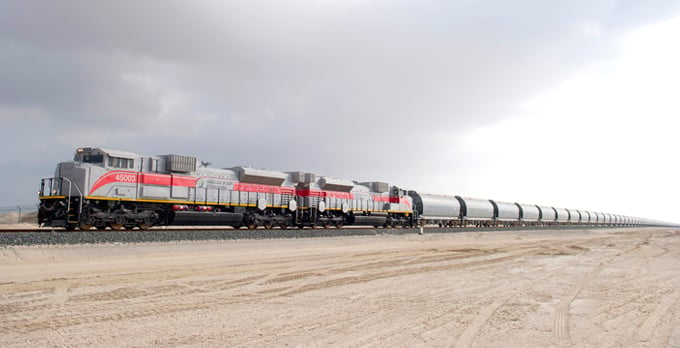 Abu Dhabi-based Etihad Rail has awarded a Dhs4.6bn contract to expand the UAE’s national railway to a joint venture of the China Railway Construction Corporation (CRCC) and National Projects and Construction (NPC), it was announced on Wednesday.

The contract covers the civil works and construction of Package D of stage two of the railway, which will link the ports of Fujairah and Khorfakkan to the network at the Dubai border with Sharjah.

Linking the ports of Fujairah and Khorfakkan to the railway network will allow the transportation of up to two million TEU’s (twenty-foot equivalent container units) per year, a statement said.

Etihad Rail trains will also carry up to 30 million tonnes of construction material annually to distribution centres in Abu Dhabi and Dubai, cutting the overall cost of transport and reducing on-road truck trips by more than 2,000 journeys per day.

By connecting quarries for building materials in the Northern Emirates to key ports, the new link will boost the freight, transport and infrastructure industries in the UAE, the statement added.

The company, which launched the first phase of its rail project in 2016, plans to establish a 1,200 km national railway network – estimated to cost about $11bn – which will also form a part of the proposed GCC Railway.