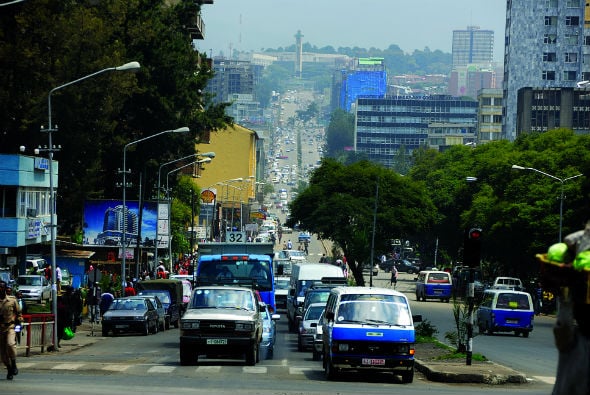 As Ethiopia’s point man in the UAE, Mesganu Arga Moach is a busy man.

In between efforts to promote Ethiopian exports, stimulate internal foreign direct investment and generate tourist arrivals to Ethiopian capital Addis Ababa and other domestic destinations, he has seen in recent months a row with the UAE authorities over the treatment of Ethiopians immigrating to the UAE for work, and a dispute between the Ethiopian Civil Aviation Authority (ECAA) and Etihad Airways.

“The UAE is a very important partner to Ethiopia. UAE economic ties are very important. There is a significant Ethiopian population in the UAE of over 100,000.”

Despite its natural and cultural riches, Ethiopian incomes are still limited, even by African standards. The IMF forecasts GDp of $47.1 billion in 2013, generating per capita income of $518, or only a third of Nigeria’s, and a tenth of Angola’s. At 85 million, Ethiopia today has the second- largest population in Africa after Nigeria (164.8 million, World Bank, 2012).

Moach is not daunted. “We have a fast-growing economy, which has seen 11 per cent growth per year in the past decade. We are attracting FDI from
many parts of the world, including Asia, Europe and the Middle East. Industry and the service sector are growing fast. There are many ppportunities for foreign investors to come in,” says Moach.

“Ethiopia is the most stable country in the Horn of Africa. It plays a constructive role in the region. Double-digit economic growth will continue in the coming years.”

One issue that blew up between Ethiopia and the UAE last October was the refusal of the Ethiopian Civil Aviation Authority (ECAA) to grant Etihad Airways rights to land in Addis Ababa on its inaugural flight. According to the ECAA, two unsuccessful attempts were made in 2011 to resolve the issue.

“It is in this impasse that Etihad announced its intention to start five flights per week to Addis Ababa starting from 2 November 2012, without the consent of the Ethiopian aeronautical authorities,” the ECAA said in a statement on 2nd November 2012. After Etihad submitted a formal request to Addis Ababa for landing rights on 13 May 2012, the ECAA claimed to have “repeatedly written to its UAE counterpart” requesting meetings, but that “response has not yet been received,” it said.

“[The UAE airline] was issuing tickets without confirmation,” said Moach.“The ECAA had been inviting the UAE to negotiate on these issues. Then Etihad started selling tickets and fixing flights. This issue is a matter of communications. It will be resolved amicably.”

The Etihad-ECAA spat appears to continue and reports saying the dispute is resolved have yet to appear.

If this dispute is not promptly resolved, and there are signs that this has delayed the inauguration of Dubai’s new trade office in Addis Ababa, the UAE authorities might take some kind of retaliatory measures, such as some kind of revocation of Ethiopian Airlines’ privileges into the UAE.

The UAE press reported on 8 January that a shortage of Ethiopian maids and nannies had led recruitment agencies to double their fees, in turn creating a black market for maids among UAE agencies reaching out to Ethiopia. Various problems for Ethiopian maids, including physical abuse and non- payment of salaries by employers, as well as abscondment, led to the Ethiopian government banning its nationals from applying for domestic-job work permits in the UAE last July.

“The governments are working together on a labour-exchange agreement,” Moach said. “We submitted a memorandum of understanding to the UAE government in late January. We hope they will immediately sign this, so that there will be a mechanism, an agreement, that Ethiopian labour can come and work in the in the UAE.”

Despite the disagreements, bilateral relations are on the up. Ethiopia will soon open its embassy in Abu Dhabi.

“A political decision has been made to open our embassy in Abu Dhabi. We hope that this will happen in the coming two-three months,” Moach says.

Major projects are underway in road, railway and energy development in Ethiopia. In four years, Ethiopia hopes to general 10GW from hydro-electricity. Given the global drive for renewables, it is anxious to harness the power of its rivers. Benishangul Regional State, on the country’s north-western border, is a focus, and already produces 6GW of hydro- electric power. “In 2016, we expect to generate 10GW [in this way],” Moach said.

Landlocked since the creation of Eritrea in 1993, which led to the loss of its two main ports, Massawa and Assab, Ethiopia is mindful of its links to the port of Djibouti. The existing colonial era railway from Djibouti to Dire Dawa needs to be replaced. Railways are to be built from Djibouti to Addis Ababa. “Northern Ethiopia is also to be connected [by rail],” Moach says. “A new line is under construction and will be finished in two years’ time.”

Huge road construction projects are also underway. Some 400 kilometres of new road will open up the Benishangul region. “Today, we have a 70,000 kilometre road network.”

In October, the Abu Dhabi Fund for Development (ADFD) signed a Dhs37 million loan for a road-building project in Ethiopia. “This was the first Ethiopian project ever funded by the ADFD,” says Moach.

Ethiopia also hopes to drive its economy by improving its exports through assistance on the ground from international investors. This will, in particular, develop the agricultural sector. Moach said Ethiopia has identified three million hectares for commercial farms. “This is arable land not associated with farms or villages. It is government-owned free land. We are promoting it with international investors.”

Chemicals, steel manufacturing, and the sugar industry, with 10 sugar factories in the country, are also growth areas. “Coffee is our number one export,” he said.

“By 2015, we are hopeful of achieving our Millennium Development Goals. Ethiopia is prospering and achieving middle incomes,” said Moach of Ethiopia’s commitment to eradicating poverty and build a prosperous economy.

“We see a proud future. As the government works towards that, the market will create itself when the economy grows in future.”