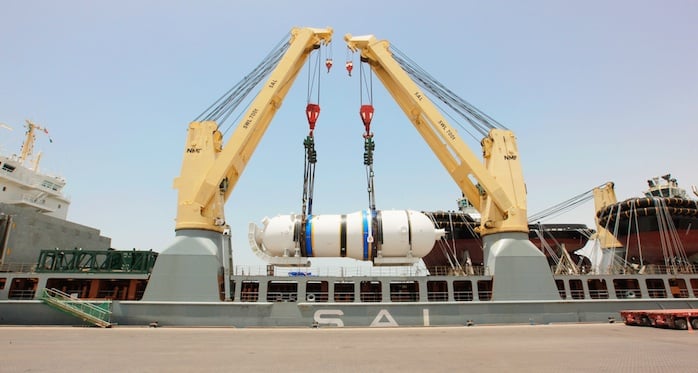 The Emirates Nuclear Energy Corporation has announced that its first unit at the Barakah nuclear energy plant is now 75 per cent complete with the project on track to begin operations in 2017.

The second unit is also 53 per cent complete, following the installation of its two steam generators, a statement said.

The two huge stainless steel SG units, which are similar in length to a tennis court, were manufactured in South Korea over a period of four years by Doosan Heavy Industries – part of ENEC’s Korean Prime Contractor consortium.

After manufacture, the generators were shipped to Barakah where they were set in place inside the Unit 2 reactor containment building.

The steam generator acts as a heat exchanger where the water carrying the heat generated from the nuclear reaction is used to turn demineralised water into steam.

Steam produced in the generator is then used to spin a turbine which drives a generator to produce electricity.

Each of Barakah’s steam generators contain numerous tubes that carry heated processed water at high pressure. These tubes are made of an alloy composed of nickel, chromium and iron, making them strong and corrosion resistant, even at high temperatures, ENEC explained.

“This is an important milestone in the continued progress and delivery of ENEC’s second unit, which is scheduled to come online approximately one year after the first unit, which will be in 2017,” said ENEC’s chief executive officer Mohamed Al Hammadi.

Over the next six months, further piping connection work will take place to connect the generators to the Unit 2 reactor vessel, turbine generators and condenser, the statement added.

ENEC announced last month that it has awarded construction contracts worth $2.5bn to local firms over the last five years for the nuclear plant.

The overall construction of the four units is now 50 per cent complete, ENEC said.

The first 1,400 MW unit is scheduled for completion in 2017 and additional units will follow at twelve monthly intervals.

The fourth and final unit is set to begin commercial operations in 2020, pending regulatory reviews and licensing.

Upon completion, the UAE’s nuclear programme will provide approximately 25 per cent of the country’s electricity needs, saving up to 12 million tonnes of greenhouse gas emissions each year.