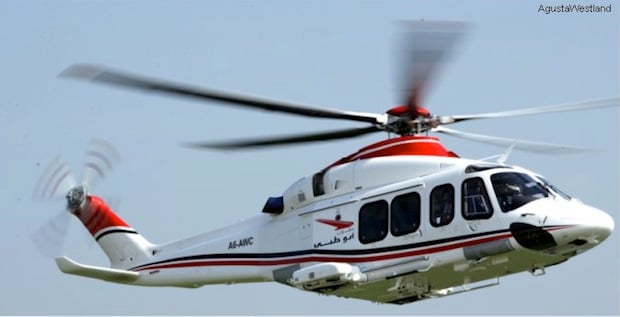 The UAE’s General Civil Aviation Authority (GCAA) has confirmed that it is currently investigating the controlled ditching of a helicopter off the coast of Abu Dhabi.

The GCAA said that the helicopter, which was transporting oil industry workers, left Abu Dhabi International Airport at approximately 12:05 UAE time with two crew members and five passengers onboard.

It landed at 12:31 on an oil rig where four passengers disembarked.

After departing from the oil rig, the flight crew reportedly received a warning message, and accordingly the commander descended to a lower altitude and diverted to the nearest heliport which was approximately seven minutes away.

During the descent, a mechanical noise was detected and hence the commander decided to conduct a controlled ditching into the water, the GCAA said.

A Mayday call was sent on the emergency radio frequency and the two crew members as well as the passenger exited the helicopter and boarded its emergency raft.

The helicopter was completely immersed in water but the floatation devices kept it afloat until it was recovered by officials.

The three occupants – who were uninjured – were rescued by the UAE coastguard and a precautionary medical check was performed, the GCAA said.

The helicopter and the flight recorder were transported to Abu Dhabi. The recorder’s data has now been downloaded and is being analysed by the investigation team to determine the cause of the accident.

“Any air accident requires rapid investigation. In this instance the crew and passengers escaped uninjured so the priority now is to support the investigation to find out the reasons behind the unfortunate event,” WAM quoted GCAA director-general Saif Mohamed Al Suwaidi as saying.

“We will be working closely with the manufacturer and relevant authorities to determine the cause of the accident and to prevent reoccurrence,” added Ismaeil Mohammed Al Hosani, assistant director-general of the GCAA’s Air Accident Investigation Sector (AAIS).

The GCAA, represented by the AAIS, is leading the investigation into the accident.

Since the helicopter was manufactured in Italy, the Italian investigation authority (ANSV) has been notified about the accident and is entitled to appoint an accredited representative to participate in the investigation, the report said.

The European Aviation Safety Agency (EASA) has also been notified, since it is responsible for determining the continuing airworthiness of the aircraft.