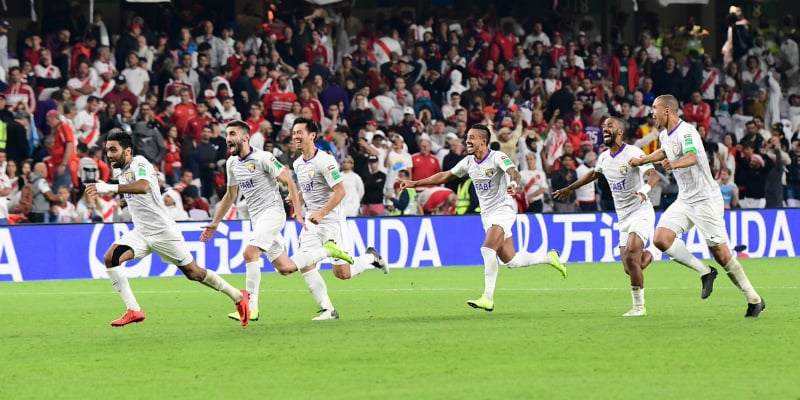 Host side Al Ain stunned South American champions River Plate 5-4 in a penalty shootout after coming back from a goal down to draw 2-2 in a thrilling Club World Cup semi-final on Tuesday.

Al Ain goalkeeper Khalid Eisa was the hero in the shootout, saving substitute Enzo Perez’s penalty to book his side’s spot in the tournament’s final on Saturday

“I’m very happy. I’m very proud. What happened tonight is incredible,” Al Ain coach Zoran Mamic told reporters. “We showed that in football everything is possible,” he added after his side became the first from the United Arab Emirates to reach the final.

“There are no excuses,” said River Plate coach Marcelo Gallardo, whose side also hit the crossbar from the penalty spot in the 69th minute.

“We didn’t play the match with the right determination.”

Al Ain will now face the winners of Real Madrid and Kashima Antlers, who play each other in the other semi-final on Wednesday.

River Plate, drawn straight into the semi-final, were expected to cruise through against a team that had to win a playoff and a quarter-final to earn their last-four spot.

Al Ain, who qualified as the host nation’s champions, got off to a dream start as Swedish forward Marcus Berg headed a corner between the goalkeeper’s legs in the third minute.

River Plate’s Santos Borre equalised in the 11th minute from close range before doubling his account and putting the Argentine side 2-1 ahead in the 16th minute.

River Plate travelled to the UAE after winning the Copa Libertadores final against fellow Argentine rivals Boca Juniors, the second leg of which was moved to Madrid following fan violence in Buenos Aires.

They controlled possession for much of the match but Al Ain were dangerous when pressing forward.

Al Ain’s Mohamed Abdulrahman, returning from a one-match suspension, had a shot from outside the box saved in the 30th minute, and a header by Berg was saved moments later.

Al Ain then had a goal disallowed by VAR for offside in the 45th minute.

Mamic disputed the decision, telling reporters it was a “clear goal,” but said that it no longer mattered after his team won on penalties.

Al Ain’s Brazilian midfielder Caio equalised for the home side in the 51st minute with a right-footed shot.

River Plate’s Gonzalo Martinez had the chance to put the Argentine team 3-2 ahead in 69th from the penalty spot but hit the bar.