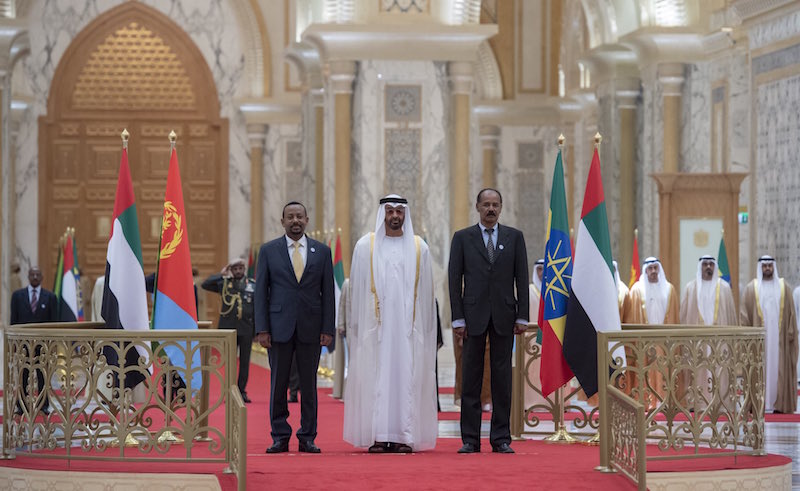 The UAE welcomed the leaders of former African rival nations Ethiopia and Eritrea on Tuesday, as part of a tripartite summit in Abu Dhabi.

The two leaders were also honoured with Order of Zayed in recognition of their work for peace between the two nations.

Mohamed bin Zayed presents the Order of Zayed, conferred to the President of Eritrea and Prime Minister of Ethiopia in recognition of their work for peace between the two nations. pic.twitter.com/LyAAl3ushm

Ethiopia and Eritrea entered into a historic peace agreement earlier this month after remaining at war for years.

“The bold & historic step taken by the leaders of the two neighbouring countries to end the conflict and open new horizons for cooperation and joint coordination is a model that can be followed in resolving conflicts around the world,” Sheikh Mohamed said on Twitter.

He also asserted that the UAE supports every effort aimed at achieving peace, security and stability across the world, official news agency WAM reported.

We are confident that this step will contribute to further cooperation & joint coordination between the neighbours & fulfil their people's aspirations for peace, development & prosperity, as well as enhance security & stability in the Horn of Africa & the wider region. pic.twitter.com/LQRnX9B2Tk

During the tripartite summit, the leaders are expected to discuss about ways of strengthening investment and commercial ties.

The UAE and KSA are key supporters of any effort aimed at achieving peace, security and stability that serves the interests of the people of the region and enhances security. pic.twitter.com/c0UIW9jbzL