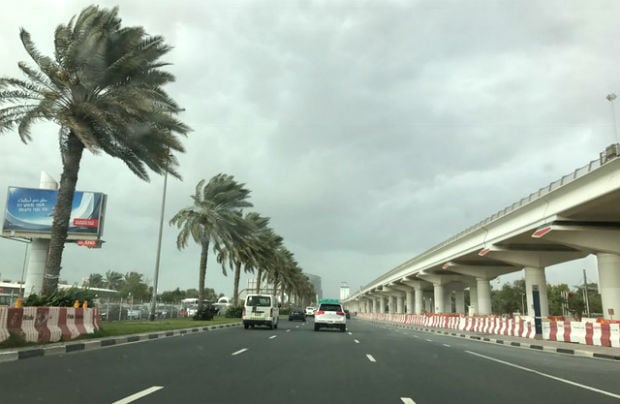 The UAE has advised the public to stay cautious of moderate to strong winds which could trigger a potential dust storm.

Blowing dust and sand are expected to render poor visibility, with wind speed averaging between 20-35 kph and reaching 50kph across internal areas.

The National Centre of Meteorology (NCM) has forecasted party cloudy weather and a dip in temperatures for Thursday, February 27, as the country recorded its lowest temperature of 8.9°C for the day at 6am in Mebreh mountain.

The NCM has also cautioned the public of rough to very rough sea conditions.

Fair to partly cloudy weather is expected to hover across the country on Friday, with possible fog and mist formation over some coastal and internal areas.

Fog is also expected to blanket scattered areas of the country with a fair to partly cloudy outlook on Saturday and Sunday, February 29-March 1.

Dubai’s Road and Transport Authority (RTA) announced that due to unsuitable weather conditions, some ferry services might be temporarily stalled.

Due to the expected adverse weather conditions, some #DubaiFerry services will be subjected to temporary disruption. Customers are kindly asked to contact #RTA Customer Happiness Centre on 800 9090 for further information.