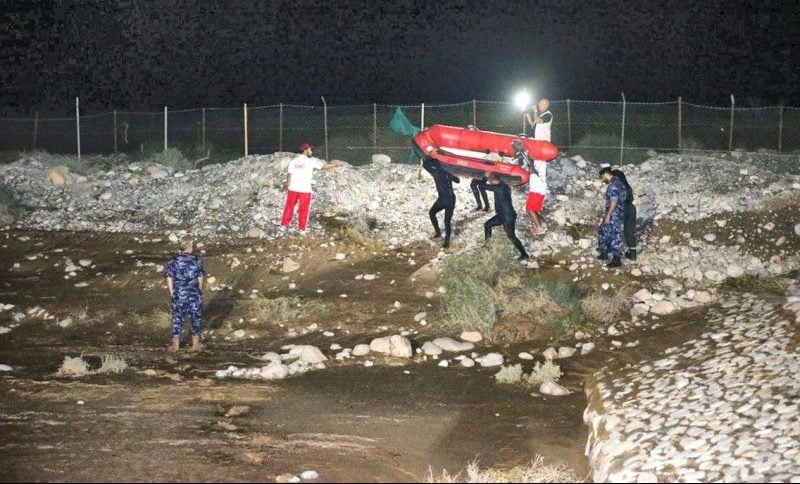 Police in Ras Al Khaimah have rescued hundreds of people from the mountains due to the severe weather conditions in the country.

Heavy rains accompanied by thunder and lightning lashed out across the UAE on Saturday, with flash floods and hail reported in RAK. The emirate also faced stormy conditions on Sunday.

Taking to Twitter, RAK police confirmed that close to 400 people were rescued from the high mountains and valleys, transported to safe places and provided medical support and food.

A further 170 people were also rescued after they were trapped in the mountains, with operations and efforts continuing until the weather conditions in the emirate have ended.

General Ali Abdullah bin Alwan Al Nuaimi, commander of RAK Police, said that the local crisis and emergency team had built a sandy road between a mountain and some valleys to cross many people trapped by heavy rains.

He also confirmed that his team – in cooperation with the relevant authorities in the emirate and Abu Dhabi and Dubai police teams, is undertaking efforts to help those whose houses have been affected in the emirate.

Meanwhile Dubai police said 203 traffic accidents were reported across Dubai from 6am on Saturday until 7am on Sunday due to rain.

Officials urged motorists to keep a safe distance between cars and adjust their speed in line with the weather conditions.

Accidents that happen during bad weather conditions due to low visibility tend to be more severe, Bin Suwaidan said, although Dubai police did not record any serious accidents or injuries.

“People should follow safety instructions and regulation to avoid any accidents,” he said.

Dubai police have also stepped up the level of readiness to deal with any incidents in the mountainous areas, places of flood and neighbouring areas, as well as in the desert areas, a statement said.

Motorists have also been urged to avoid water pools and valleys as well as the desert – especially after the rain.