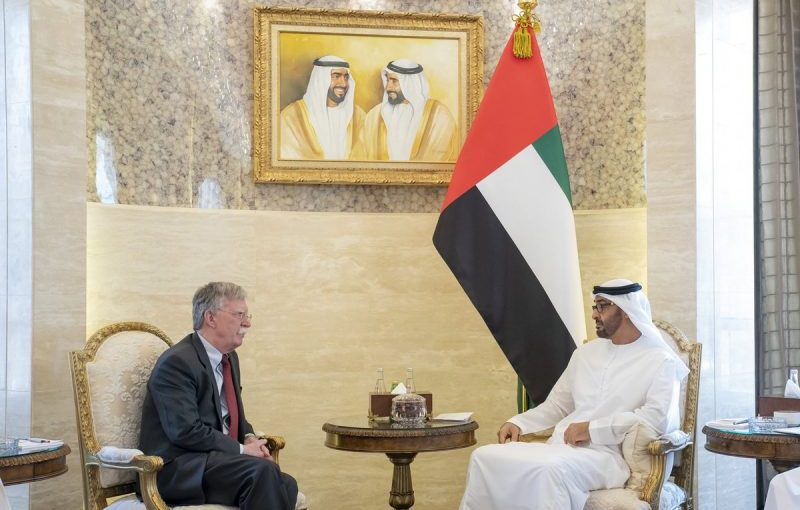 The agreement “will enhance military coordination between the two nations, further advancing an already robust military, political and economic partnership at a critical time,” WAM said, citing a joint statement.

The agreement was signed earlier this year and has now come into force, it said.

Bolton said on Wednesday that naval mines “almost certainly from Iran” were used to attack oil tankers off the United Arab Emirates this month, and warned Tehran against conducting new operations.

He said the “prudent and responsible” approach taken by the United States, which has beefed up its military presence in the region, had made it clear to Iran and its proxies that such actions risked a “very strong” U.S. response.

He was speaking to reporters in Abu Dhabi ahead of emergency summits of Arab leaders in Saudi Arabia on Thursday called to discuss the implications of the tanker attacks, and drone strikes two days later, on oil pumping stations in the kingdom.

The UAE has not yet blamed anyone for the sabotage of four vessels, including two Saudi tankers, near Fujairah emirate, a major bunkering hub just outside the Strait of Hormuz.

Riyadh has accused Tehran of ordering the drone strikes, which were claimed by the Iran-aligned Houthis who have been battling a Saudi-led coalition in Yemen in a four-year conflict seen as a proxy war between Saudi Arabia and Iran.

“I think it is clear these (tanker attacks) were naval mines almost certainly from Iran,” Bolton said without providing evidence. “There is no doubt in anybody’s mind in Washington who is responsible for this and I think it’s important that the leadership in Iran know that we know.”

He declined to comment on the specifics of the investigation into the attacks in which the United States, France, Norway and Saudi Arabia are taking part, but said those other countries and ship owners involved could do so.

Saudi Arabia’s foreign minister said on Wednesday the attacks on UAE and Saudi oil facilities must be addressed with “strength and firmness” and more efforts were needed to combat the activities of the groups that carried them out.

Addressing a meeting of foreign ministers ahead of the summits, he said such attacks were a threat to the global economy, regional and international security.