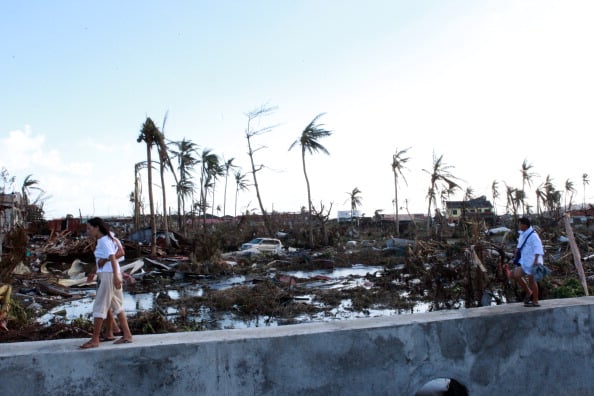 The UAE has pledged Dhs36 million ($10 million) in aid to the Philippines after Typhoon Haiyan, one of the strongest storms on record, wreaked havoc across the archipelago.

Up to 10,000 people are believed to have died in Tacloban city alone with hundreds of thousands displaced and up to four million affected, with food and clean drinking water in short supply.

A report by state news agency WAM said: “On the instructions of His Highness Sheikh Khalifa Bin Zayed Al Nahyan, President of the United Arab Emirates, the UAE is announcing support and assistance programs and projects of USD $10 million to the Philippines.

“The UAE extends its deepest sympathies for the loss of life and property caused by Typhoon Hayan in the Philippines.

“The UAE believes that the international community must stand together in times like these and assist the relief efforts. With this contribution, the UAE Government affirms its deep solidarity with those affected by this natural disaster in the Philippines.

“Our thoughts and prayers are with the victims of this terrible tragedy and their families.”

Officials suspect the death toll could climb higher as emergency crews are still unable to reach many affected areas as flooding and landslides have cut off access.

A charity dinner was held in Dubai last month to raise money for the victims of a 7.2-magnitude earthquake that hit the Philippines in October, leaving 213 people dead.

A further report by WAM said: “President His Highness Sheikh Khalifa bin Zayed Al Nahyan has sent a condolence cable to the President of the Philippines, Benigno Aquino III, for victims of Super Typhoon Haiyan.

“He expressed his profound sorrow and solace to President Aquino III and the people of the Philippines, wishing speedy recovery to the injured.”