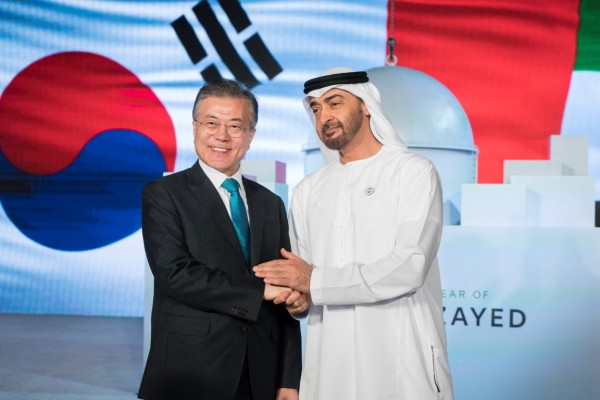 The two dignitaries visited the Barakah power plant, located nearly 300 kilometres west from the centre of Abu Dhabi, with the Crown Prince taking to Twitter to thank the president for his country’s cooperation in the project to build the plant, calling their work together a “model relationship”.

The completion comes nine years after Emirates Nuclear Energy Corporation (ENEC) awarded the contract for the Middle East’s first nuclear power plant to a consortium of South Korean companies, headed by the Korean Electric Power Company. The contract was reported to be worth between $20bn and $25bn.

Earlier this year Reuters reported that the opening of the plant has been pushed back to 2019 due to training delays, according to sources, with other sources suggesting the date had been moved to 2020

Another stumbling block has been the refusal of UAE regulator the Federal Authority for Nuclear Regulation (FANR) to yet give an operating licence to Nawah – the joint venture between KEPCO and ENEC, which will operate the plant.

Regardless, the Barakah plant is a sign of intent by the UAE to establish new forms of energy. The country is building four APR-1400 nuclear reactors in what is one of the world’s largest nuclear newbuild projects and will be the first nuclear reactor in the Gulf.

The UAE will be the first new country to acquire nuclear power in more than two decades. Bangladesh, Turkey and Saudi Arabia aim to follow suit and the World Nuclear Association estimates that nuclear power is planned in over 20 countries which do not currently have it.