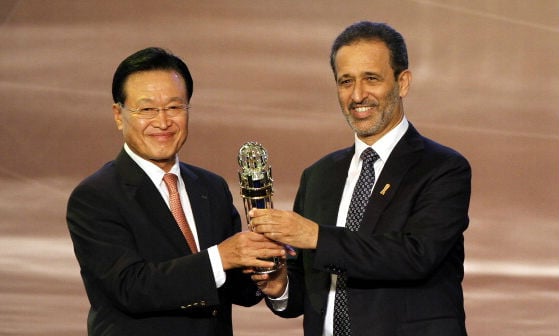 UAE soccer chief Yousuf Al Serkal, a candidate for the presidency of the Asian Football Confederation (AFC), has criticised the continent’s Olympic council for allegedly interfering in next month’s vote.

Al Serkal is one of four candidates vying for Asian football’s top job, with the AFC lacking a permanent president since Qatari Mohamed Bin Hammam was banned for life by FIFA for corruption and bribery.

Al Serkal is concerned about what he said was the endorsement of Bahrain’s Sheikh Salman by the Olympic Council of Asia (OCA), one of five continental associations recognised by the International Olympic Committee and run by Kuwait’s Sheikh Ahmad al-Fahad al-Sabah.

“They are trying hard to influence the voting, but I believe the family of football will try to be independent,” Al Serkal told a news conference in Dubai on Monday that was held to unveil his election manifesto.

“If it was only Sheikh Ahmad himself doing that on a personal level it would be OK. Anybody has the right to support one candidate or another, but since it has been done in an official way that’s direct interference.”

The Kuwait-based OCA did not respond to requests for comment.

The AFC has 47 member associations and the three Arab candidates are likely to split the West Asia vote, while Makudi has the backing of the 12 votes from Southeast Asia and is campaigning hard for eight votes in the South Asian region.

Al Serkal said Saudi candidate Al Medlej may withdraw from the election, which comes with Qatar preparing to host the 2022 World Cup amid a backlash over the heat and bidding process.

“I’ve heard him hinting towards it, but he did not come out clearly and say it,” said Al Serkal. “If he withdraws I’m sure he will be withdrawing and supporting me.”

Al Serkal pledged to reunite the AFC, acknowledging the federation had become more renowned for political infighting and corruption than on-field exploits in recent years.

“It is critical we regain the integrity of the game in Asia,” he wrote in his manifesto.

He promised to declare all benefits and expenses he accrues as president should he win the vote while he also proposed to introduce a whistleblower programme to encourage players and officials to report irregularities.

“I know that I will win,” Al Serkal said. “When campaigning you receive a lot of confirmations from confederations and I have received enough confirmations to make me feel comfortable.”

He met with FIFA president Sepp Blatter in Zurich last month and hinted that the Swiss had privately endorsed his candidacy.

“We have to respect Mr Blatter’s position at FIFA – if I was in his place I wouldn’t come out and say I was supporting so-and-so,” he said.

“But I was looking forward for his blessing, which I felt I have. I left FIFA with much more comfort than when I entered.”

“We’ve known each other for a long time and I am a close friend, but that friendship had nothing to do with the work we used to do – I keep friendship separate from work,” he added.

“I’ve been serving in the AFC for a long time – regardless of what allegations were taken against whomever from the AFC it did not touch me at all.”