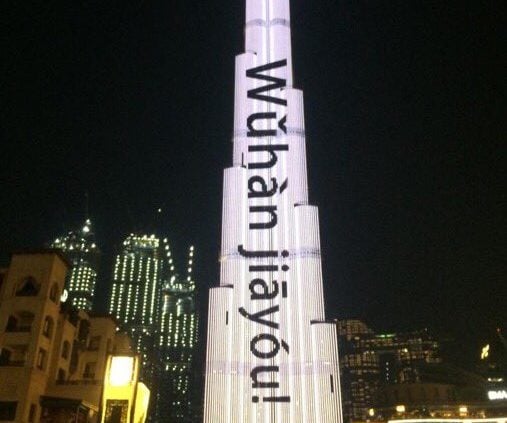 The towering Burj Khalifa in Dubai as well other iconic landmarks across the country lit up on Sunday night in hues of pearl and red, to mark UAE’s solidarity to China and its diaspora.

The facade of the world’s tallest tower donned colors and expressions that mirrored its commitment to support China as the novel coronavirus (2019-nCoV) continues to spread through the country.

Other buildings in the UAE that were emblazoned with the Chinese national flag included the Capital Gate, the Abu Dhabi Global Market, the Emirates Palace and Sheikh Zayed Bridge in Abu Dhabi, Burj Al Arab in Dubai and Hazza bin Zayed Stadium in Al Ain.

#Dubai’s @BurjKhalifa lights up to show support for Wuhan and Chinese communities around the world. pic.twitter.com/81K8VaZqxF

The UAE has expressed confidence that China will be able to contain the spread of the epidemic.

The coronavirus, commonly referred to as the Wuhan virus, tallied the total number of deaths to 361 in China with confirmed cases in the country at 17,205.

The UAE confirmed its fifth case of coronavirus on February 1, four earlier ones being members of one Chinese family that had flown into the UAE on January 16.

Global efforts to contain the virus escalated as the Philippines reported the first death outside of China and the US confirmed more infections.

Airlines in Asia, Europe and the Middle East stopped service to the mainland, while the US began limiting the entry of travelers from China.

In light of the virus, Abu Dhabi’s Etihad Airways stalled milk runs on the Beijing-Nagoya route.