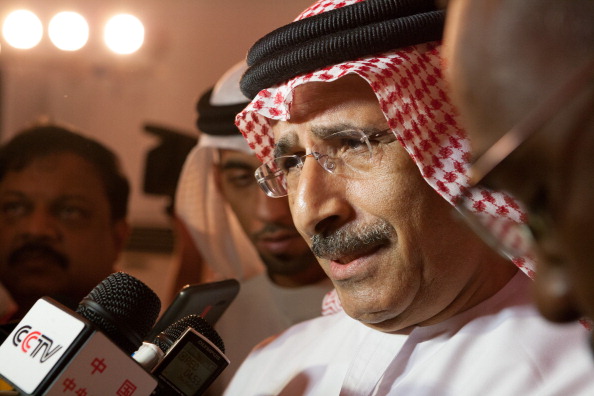 The world’s top oil exporter cut its crude production by around 700,000 barrels per day (bpd) over the last two months of 2012, pointing to low demand at home and abroad.

The UAE produced around 2.60 million bpd of crude in December and November, down marginally from around 2.62 million bpd in October. But the UAE has enough customers to take all its current production and sees no pressing need to follow the Saudi cut.

“No. At the moment we are just producing the way we are … We are monitoring the market all the time, and right now the market is capable of taking all we produce,” Mohammed Al-Hamli, the UAE oil minister, told journalists when asked if he saw the need to cut output.

“The market is well balanced … Well maybe it’s a little bit over supplied, but generally it is well supplied,” he said.

“World demand is still not in good shape. There will be an increase in demand (in 2013) but less than last year … It really depends on how the crisis is handled.”

Saudi production of 9 million bpd in December was more than a million barrels below its peak production last summer, when the kingdom’s own oil use peaks as it generates electricity to meet soaring air conditioning demand.

The UAE produces nearly all of its electricity by burning gas, so its demand for oil is less seasonal than in neighbouring Saudi Arabia.

Record Saudi output last summer helped cushion the impact on the oil market of Western sanctions on Iran over its nuclear programme by helping to bring prices down from a 2012 high of $128 in March.

Even after the Saudi reduction, OPEC output still looks set to outstrip demand in the first half of 2013.

OPEC is pumping about 30.2 million bpd, while forecasts from the cartel’s economists for the first half indicate demand for its oil of 29.25 million bpd.