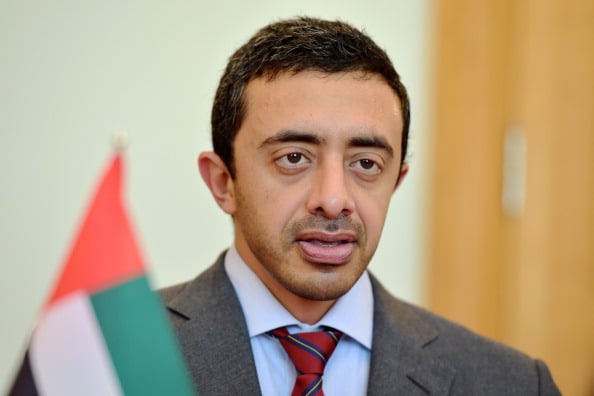 Iran is sowing discord in Yemen and other regional countries as part of a “revolution export” strategy, the foreign minister of the United Arab Emirates said on Wednesday, and Gulf Arab states are losing hope of building normal ties with Tehran.

Sheikh Abdullah bin Zayed al-Nayahan also said a Saudi-led coalition now carrying out air strikes on Iranian-allied Houthi fighters in Yemen seek a U.N. Security Council resolution requiring all to pursue dialogue and imposing a ban on arms purchases by Houthis and other groups “that are out of line”.

“Iran is not carrying out this activity only in Yemen, it is conducting the same activity in Lebanon, in Syria, Iraq, Afghanistan and in Pakistan.

“Someone might say that the information provided by Yemen is not accurate, but there is systematic action that has been going for years on the idea of exporting the (Iranian) revolution.”

Iran denies arming the Houthis and has condemned the Saudi-led offensive against the Houthis of which the UAE is a part. The Islamic Republic sent two warships to the Gulf of Aden on Wednesday, saying they would protect Iranian shipping.

Arab leaders and analysts say they believe Iran is working unconstrained to tighten its sway on Arab states including Iraq, Lebanon, Syria, and Yemen as it has edged towards a settlement with world powers including the United States on curbing its nuclear programme in return for an end to sanctions.

Sheikh Abdullah said Sunni Muslim Gulf Arabs could have “positive, normal” relations with Tehran, “but Iran is not giving its partners in the region this hope… Each time we try to come close to Iran it starts spoiling the region, making (matters) difficult for our countries.”

“It is not possible to accept any strategic threat to Gulf Arab states,” he added.

The UAE is a key member of the Saudi-led coalition which has waged almost daily air raids on the Houthis, trying to stop them from capturing the southern port city of Aden, the last stronghold of Hadi who fled there in February after a month under Houthi house arrest.

The Houthis became power brokers in Yemen in September last year when they exploited internal divisions and seized the capital Sanaa, saying they were trying to root out corruption.

Gulf Arab states grew more alarmed in January when the Houthis captured the presidential palace and placed Hadi under house arrest in his own residence.

Yemeni Foreign Minister Riyadh Yassin said there was much evidence of Iranian meddling in Yemeni affairs, including quietly arming the Houthis and training them in Iran.

“There are a number of Iranian Revolutionary Guards inside Yemeni territory,” Yassin said, without saying how many or giving other details.

He said the struggle between U.S.-allied, mainly Sunni Gulf Arabs and Shi’ite Iran was no sectarian conflict.

“I hope we do not fall to the thinking this is sectarian issue… This is not a sectarian issue, this is related to the idea of exporting the revolution which is part of their constitution and their system,” he said.

Sheikh Abdullah further said Gulf Arab states and other Arab allies were seeking a political settlement for Yemen in which all factions, including the Houthis, would take part in talks chaired by Hadi.

“Unfortunately the Houthi group refuses to heed what it had pledged itself to do.”