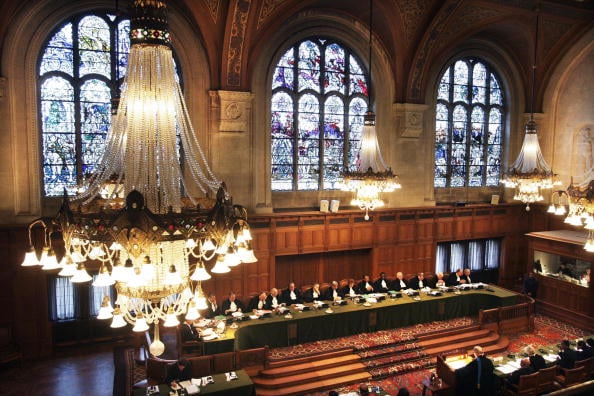 The UAE’s mission to the Hague said on Wednesday that Qatar was misusing international organisations after the country asked the International Court of Justice to order the emirates to reverse boycott measures it said were discriminatory.

Qatar is seeking immediate relief in the unusual case before the ICJ, the United Nations’ venue for resolving legal disputes between states, informally known as the World Court.

The UAE, Saudi Arabia, Bahrain and Egypt imposed a boycott on tiny, oil-rich Qatar in June 2017, severing diplomatic and transport ties and accusing it of supporting terrorism, charges which it denies.

Qatar’s agent told the court the boycott was having “a devastating impact on Qataris and their families” as thousands were unable to visit family members still in the emirates.

Mohammed Al-Khulaifi argued to judges that the boycott violates the International Convention on the Elimination of All Forms of Racial Discrimination (CERD) – including discrimination on the basis of nationality – a treaty signed by both the UAE and Qatar.

The UAE’s mission to the Hague said Qatar’s claims were unfounded in comments carried by state news agency WAM.

The emirates also said in response that Qatar was abusing international organisations in an attempt to “divert attention from the real reason” for the boycott, which is “based on its illegal practices of supporting terrorism, harbouring extremists” and “interfering in the affairs” of neighbouring states.

“The UAE makes note of its clear position towards the Qatari people, this position having been the result of practices instigated by their own government, in which they have no part but which have led to their suffering,” according to the statement.

The UAE, which previously dismissed Qatar’s claims as “lies”, is due to officially respond in court on Thursday. Saudi Arabia, Bahrain and Egypt are not signatories of the CERD convention.

According to Qatar, the UAE have as part of the boycott expelled Qataris, blocked transport and closed down the offices of the Doha-based Al-Jazeera news channel, among other measures. In their request for provisional measures it has called for those moves to be reversed.

The UAE said in its comments the “fulfilment of its [Qatar’s] obligations is the only way out of the crisis”.

A provisional ruling could come within two months, though the court has not yet set a date. Disputes at the court usually take several years before a formal judgment is reached.

Separately, the UAE, Saudi, Egypt and Bahrain said on Wednesday they would bring a sovereign airspace dispute with Qatar to the International Court of Justice on the grounds that UN aviation body the International Civil Aviation Organisation (ICAO) “was not competent” to consider it.

Their airspace will remain closed to Qatar on national security and sovereign grounds until a court judgement, with WAM outlining how the appeals and hearings “are expected to take a long time before a decision is made”.