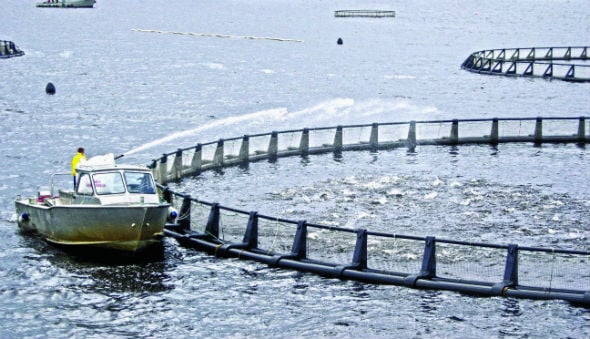 Asmak, an Abu Dhabi fish farming company, plans to bring a new home-reared species to UAE dinner plates in 2014 with the launch of the Middle East’s first salmon farm.

In a region where the grouper breed hammour is the most recognisable local fish on restaurant menus, the new project will offer local salmon and other species of fish promising to ensure a steady supply to the MENA region to competitively compete with current imports.

Based in the western region of the Abu Dhabi emirate, the Dhs100 million project will be a unique proposition for the Gulf.

Asmak’s plans are to build two projects: a land based recirculation aquaculture system (RSA) farm including a cluster for small fish farmers and an offshore sea cages farm in Dalma Island.

The land based RSA farm will cover an area of 500,000 square metres and produce 4,000 metric tonnes of fish a year including salmon, seabream, barumundi and subaiti. The process works by chilling seawater before re-using it.

The project will be a challenging one for Asmak given the region’s climate. The Abu Dhabi company plans to use Scandinavian technology to keep the salmon pools chilled at 13 degrees Celsius – a positively arctic temperature compared to the local seawaters in the Arabian Gulf which can touch 40 degrees in summer.

Whereas traditional fish farming occurs offshore, the new onshore method has been successful in Europe and North America despite its greater expense. Fish are less likely to be harmed due to the zero chance of disease spreading into the sea or of farmed fish escaping into the wild.

Asmak said its team of local farmers would be constantly updated on international practices by visiting experts from Norway and Ireland – the two countries the emirate currently sources most of its salmon from.

The pink fish is currently flown into the UAE, chilled at temperatures below freezing, at a cost of around $4-$5 per kilogram.

The project will also include a small fish-farming cluster comprising of 50 farms to annually produce 100 metric tonnes of seabream as well as some endangered species.

As well as the land-based farm, Asmak is also planning to develop an offshore sea cages farm in Dalma Island consisting of 50 cages covering an areas of 250,000 square metres.

The offshore development will produce hammour, subaiti and seabream. The farm will also host a processing plant with a production capacity of 800-1,000 metric tonnes per annum, guaranteeing around 20 jobs.