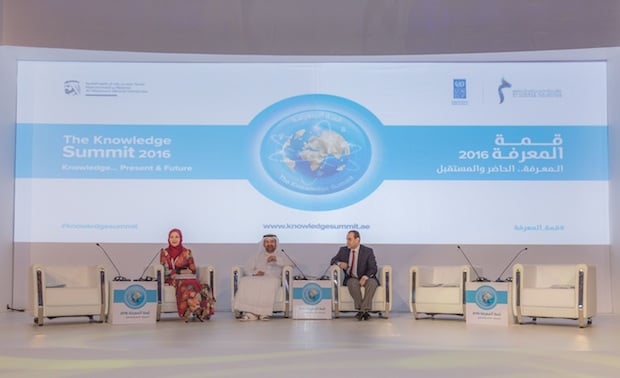 The UAE has been ranked fourth in the Arab region when it comes to reading, according to the Arab Reading Index released on Tuesday.

The index – the first of its kind in the region, surveyed reading patterns in 22 countries across the MENA region.

It found that the average reader in the UAE spends 57 hours reading 24 books per year.

Region-wide, the index found that Arabs read 35 hours per year on average, contrary to previous claims stating that they only read six minutes a year.

The time spent reading included 15 hours in schools or universities and 20 hours outside academic institutions.

The index also found that the average number of books read across all Arab countries amounted to 16 per year including seven at schools and universities.

The results of the index were revealed at the Knowledge Summit 2016, organised by the Mohammed bin Rashid Al Maktoum Foundation (MBRF).

Jamal bin Huwaireb, managing director of MBRF, said: “We had always heard these statistics being cited, claiming that Arabs only read six minutes on average every year and that, statistically, it takes 80 Arabs to read one book every year. We were very sceptical and sought to determine the source of these statistics only to find that there was virtually no sound evidence to support them. This is why we launched the Arab Reading Index, and set out to find the accurate data ourselves – and from all Arab countries.”

The survey also revealed that 65 per cent of respondents view reading as a necessity, and 70 per cent of them consider it to be no less important than education.

Majority of the respondents also favour digital means of reading over traditional ones – with 19 of the 35 hours spent on reading every year dedicated to digital.

Bin Huwaireb said: “In Europe, paper is making a comeback and actually surpassing digital material. Over there, they publish by the thousands and millions, whereas in our region, we publish by the hundreds. This is why Arab readers resort to e-books and other digital sources. We must make it a priority to print more books and to make them more affordable to all segments of society.”

According to Najoua Ghriss, professor at the Higher Institute of Education and Continuous Training in Tunisia and main author of the Arab Reading Index, it is crucial for the region to launch initiatives to improve education and reading in the region.

“Seeking knowledge without reading is simply inconceivable. This is why, if we are serious in our efforts to spread knowledge, we must establish tools to measure and monitor reading. This is where the Arab Reading Index comes in – its legitimacy comes from the fact that it was born out of the Arab Reading Challenge,” she said.

The $3m Arab Reading Challenge, launched in the UAE last year, attracted 3.59 million students from 30,000 schools in 21 countries in its latest year. About 150 million books were collectively read as part of the initiative.

The Arab Reading Index has been produced through a partnership between the MBRF and the Regional Bureau for Arab States of the United Nations Development Program.

The survey polled 148,000 people across all 22 Arab-League countries.