UAE President Sheikh Mohamed bin Zayed Al Nahyan received Yoon Suk Yeol, President of the Republic of Korea, who is on a multi-day visit to the UAE.

The ceremony included a performance of the Korean national anthem, followed by 21 artillery rounds fired, and guards of honour lining up to salute the distinguished guest, according to the state news agency WAM. 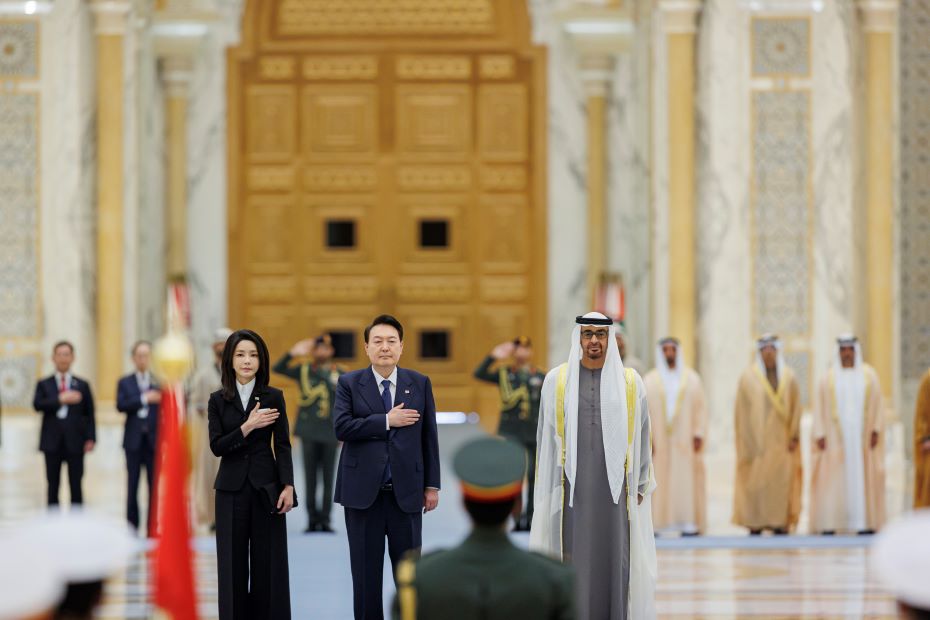 Prior to the arrival of the South Korean President’s convoy to the palace square, the Fursan Al Emarat aerobatics team flew over the palace sky, forming the Korean flag.

Welcoming the Korean President were a group of dignitaries, ministers and senior officials, WAM reported.

UAE and Republic of Korea….43 years of bilateral relations#WamVideo pic.twitter.com/jXzYeCOyzn

The South Korean President was received by Sheikh Abdullah bin Zayed Al Nahyan, Minister of Foreign Affairs and International Cooperation on his arrival a day earlier.

The South Korean leader, who will be attending Abu Dhabi Sustainability Week, will meet a number of state officials and visit development projects during the trip. Topics discussed during the visit will include nuclear energy, climate change, health, the space sector, smart agriculture and culture.

The UAE and South Korea have officially had bilateral relations since 1980; the countries have worked closely on many projects together, including the Barakah Nuclear Energy Plant.