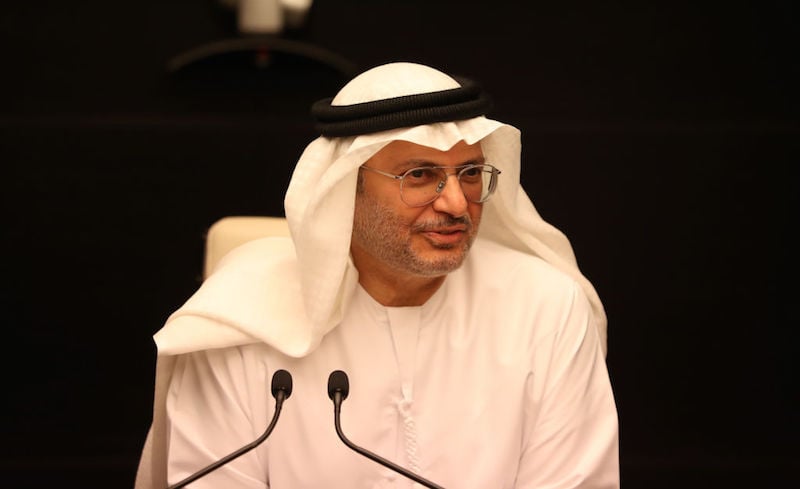 The United Arab Emirates will show restraint after attacks on oil tankers off its coast and is committed to de-escalation during a “difficult situation” caused by Iranian behaviour in the region, a senior official said on Wednesday.

Minister of State for Foreign Affairs Anwar Gargash said he would not speculate about who was behind Sunday’s sabotage acts on four vessels, including two Saudi tankers, near Fujairah emirate while an investigation was under way and due to be completed within days.

“We need to emphasise caution and good judgment. It is easy to throw accusations but it is a difficult situation, there are serious issues and among them is Iranian behaviour,” he said, mentioning concern about Iran’s missiles and regional policy.

“We will actually with our partners also be deliberate in considering our response, what to do about it, how to deal with it,” he said, adding the United States and France were helping with the probe.

France has a naval base in Abu Dhabi.

A UAE official had told Reuters that Saudi Arabia and Norway were also involved. A Norwegian-registered oil products tanker was among the vessels hit, along with a UAE fuel bunker barge.

Iran has distanced itself from the attack off Fujairah, one of the world’s largest bunkering hubs lying just outside the Strait of Hormuz. U.S. officials believe Iran encouraged Yemen’s Houthi group or Iraq-based Shi’ite militias to carry out the attack, two U.S. government sources said on Wednesday.

Gargash said the attack took place in UAE territorial waters but declined to comment on whether the OPEC producer and regional trading hub was beefing up security after the incident.

Egyptian President Abdel Fattah al-Sisi, in comments after talks with Abu Dhabi Crown Prince Mohammed bin Zayed al-Nahayan, said the most populous country in the Arab world regarded Gulf security as part of its own security.

“The president expressed Egypt’s full solidarity with the United Arab Emirates and Saudi Arabia in confronting all attempts to undermine the security and stability of the two sisterly countries,” Sisi spokesman Bassam Rady said in a statement.

Saudi Arabia shared the concerns of its fellow Sunni Muslim ally that Iran has for a long time been undermining stability in the region, Gargash said, and the US commitment to its allies in the region is “very strong”.

“U.S. sanctions on Iran are biting, and biting in a very effective way,” Gargash said.

The attacks took place against a backdrop of US-Iranian tension following Washington’s decision this month to try to cut Iran’s oil exports to zero and beef up its military presence in the Gulf in response to what it said were Iranian threats.

Saudi Arabia and the UAE back the sanctions against Iran, a fellow OPEC producer but regional foe. After the United States ended sanctions waivers that had allowed some nations to continue importing Iranian crude, Washington said Riyadh and Abu Dhabi would help compensate for any shortage in oil supply.

Tehran has called the U.S. military presence “a target” rather than a threat, and said it would not allow its oil exports to be halted.

Iranian Foreign Minister Mohammad Javad Zarif has said that “extremist individuals” in the U.S. government were pursuing dangerous policies and that Tehran is not seeking confrontation.

“On Iran, it doesn’t really help to hear Foreign Minister Zarif trying to offer a moderate voice with regards to Iran’s intentions,” Gargash said. “We have been bullied by Iran, we have seen aggressive Iranian actions in the region. So his words are very hollow in that sense.”