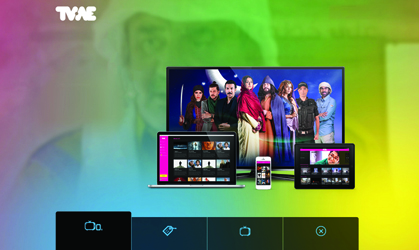 “I am shocked by the amount of talent in this region,” says Marwan Saab, chief creative officer of TV.ae.

“Shocked. If you take Instagram for example, the stuff that you see coming from the UAE and the GCC is absolutely stunning, beautiful in its craftwork. There’s a boy from Saudi Arabia, who in real life is this shy kid, but when you put him in front of a camera, he just comes to life. He was more than two million followers on YouTube. But, one of the things we have discovered that there is a real lack of funding for talent and good content here.”

Saab is the chief creative officer at the simply titled Tv.ae, an Abu Dhabi-headquartered video platform that launched at Dubai Lynx in March.

Styling itself as Netflix-meets-YouTube, the site will host a mixture of subscription-based ‘premium’ shows alongside free, user-generated content – a tricky selling point given the easy availability of both sites in the UAE, coupled with the ease of illegal streaming.

However, for Saab and founder Ali AlShaib, the vision is not to compete financially with the both digital and traditional rivals. Instead, it is to be home, and it is hoped, launchpad for the region’s young talent and budding filmmakers.

“We want to invest back into the region and the talent, Saab explains. “Either people already in the industry who we will help get exposure or finding people who just have the ideas and passion, and just giving them the technical and financial support, or even just co-producing from the beginning.” He adds: “It is an expensive proposition.”

With the glut of funding intended to come from the subscriptions and advertising, Tv.ae will first fund and host just five to 10 creators, who will get the chance to make pilots. The success and popularity of these pilots will determine which of them are chosen for full-scale production.

A call-out for submissions will be issued post-Ramadan, and while production-levels are not expected to be cutting-edge, for Saab it must both resonate with people in the Middle East and fit with the mobile-fixated younger generation, meaning pilots can range from anything from 10 minutes to 25.

“Films are now shot on iPhones. That wouldn’t perhaps work on traditional media, but it’s perfect for us,” he says.

“Production value can be improved, but you’re more likely to watch something if it’s a story that connected with you; if it speaks directly to me you’re more willing to forgive certain things. If it doesn’t, you want something extremely pretty to look at, and that’s where Hollywood blockbusters. And it’s true, young people are not watching TV anymore. They don’t want to be stuck with the ’I have to be here to watch what I want’ it’s more they want to be in a coffee shop, with their friends, sharing their content. You never see anybody sitting down without looking at a video on their phone.”

Yet as well as providing a new vehicle for the Arab region, the ultimate vision behind Tv.ae is to bring it to the rest of the world. While initiatives at European film festivals such as Sweden and German have played a major role in encouraging and financing internationally acclaimed work from Arabic talent, on home turf the same cannot be said, believes Saab. As a result, much of the top Arabic-created work is telling a foreign story, he adds.

“If you go to Hollywood and Europe as well, there are a lot of Arabs involved, directors, producers and actors who are really good. But when these people are in their home country, nobody actually talks about them. They have to outside to achieve that level of success, and when they go outside, unfortunately, what they’re pushing is not necessarily something close and dear to their hearts. It’s not their stories and culture they’re talking about, it’s somebody else’s’. And we want to be able to tell the story that’s coming out of here and reach it to the world.”