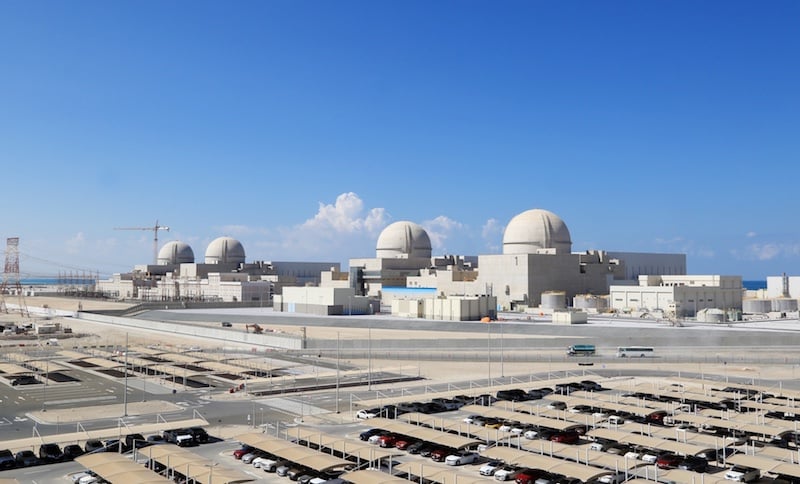 The Emirates Nuclear Energy Corporation (ENEC) has completed fuel assembly loading into Unit 1 of the Barakah nuclear power plant, marking the start of nuclear operations to generate electricity, it announced on Tuesday.

The UAE has now officially become the first country in the Arab World to become a peaceful nuclear energy operating nation.

The load of the 241 fuel assemblies into the Unit 1 reactor was completed this week, after ENEC received the operating licence from the UAE Federal Authority for Nuclear Regulation (FANR) in February.

With fuel load completed, the plant is now ready to begin the next stage, which will be for Nawah – the operations and maintenance subsidiary of ENEC and the Korea Electric Power Corporation (KEPCO) – to start operating the plant.

That will begin with a process known as Power Ascension Testing (PAT), in which the systems of Unit 1 are safely and gradually tested to move into full electricity production.

As per the contract signed between ENEC and KEPCO, this process, conducted in line with all regulatory requirements, will be led by KEPCO, a statement said.

Once the process is completed over the course of a number of months, the plant will begin delivering baseload electricity, the statement added.

“Our teams have been training over the years to safely progress towards providing the UAE with clean, reliable and abundant electricity to power our economic and societal growth,” said Mohamed Al Hammadi, CEO of ENEC.

“Today, we are very proud as the UAE joins a limited group of nations who have achieved the global standards necessary to become peaceful nuclear operating nations. We take this responsibility very seriously and our teams are safely and steadily transitioning through the sophisticated, highly-regulated process to advance Unit 1 towards full electrical generation capacity.”

To date, over 255 inspections have been undertaken by FANR to ensure the Barakah plant and its people and processes meet the standards of nuclear quality and safety.

These national reviews have been supported by over 40 assessments and peer reviews by the International Atomic Energy Agency (IAEA) and the World Association of Nuclear Operators (WANO) to ensure alignment with international best practice in the nuclear industry.

ENEC is currently in the final stages of construction for the remaining three units of the Barakah nuclear energy plant in the Al Dhafra region of Abu Dhabi.

The four units at Barakah will generate up to 25 per cent of the UAE’s electricity demand by producing 5,600MW of clean electricity, and preventing the release of 21 million tonnes of carbon emissions each year – the equivalent of removing 3.2 million cars off the roads annually.

“Barakah is more than an energy plant, it brings prosperity and value to the UAE with new industrial and human capacity, it significantly improves the carbon footprint and energy security of the Nation, and accelerates the decarbonisation of the power sector to contribute to alleviating global climate change,” said Al Hammadi.