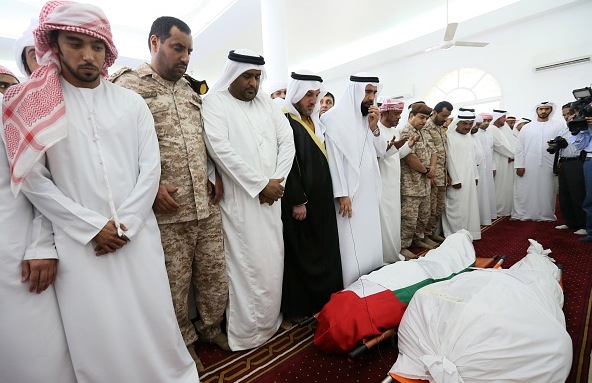 The United Arab Emirates has declared a three-day mourning period for the 45 soldiers who were killed in Yemen last week while in active duty.

Schools and other institutions will not have a holiday but the flags will be flown at half mast during this period while other major entertainment events will also be postponed, officials said.

Campaigning for Federal National Council elections that were scheduled to begin today will be postponed. They will instead begin on Wednesday after the mourning period ends.

The Emirati soldiers were killed on Friday morning after a rocket was launched at an ammunition depot of the military brigade, causing severe explosions. About 10 Saudi soldiers, five Bahraini soldiers and four Yemeni soldiers were also killed in the attack. The attack took place in Marib area, close to Saudi Arabia’s border.

The bodies of the soldiers were flown to Abu Dhabi, where funerals were held on Saturday evening.

Following the attack, the UAE and Saudi Arabia warplanes struck a number of Houthi targets in Yemen.

Despite incurring heavy casualties, the UAE has reiterated that its stance will remain firm regarding its operations in Yemen. Abu Dhabi’s Crown Prince Sheikh Mohammed bin Zayed Al Nahyan said that Friday’s attack has made the country’s armed forces more determined to liberate Yemen and they will not give up until Yemen is free of rebel forces.

Gulf countries, led by Saudi Arabia, have been conducting air strikes against Shi’ite Houthis for the last few months and are trying to restore President Abd-Rabbu Mansour Hadi’s government in the country. In addition, the coalition has also provided material and military support to factions within the country fighting the Houthis.

The UAE’s military forces have specifically played an important role in halting the Houthis’ advance in Yemen and securing the port city of Aden, facilitating aid ships to come into Yemen and commercial flights to take off from Aden’s airport.