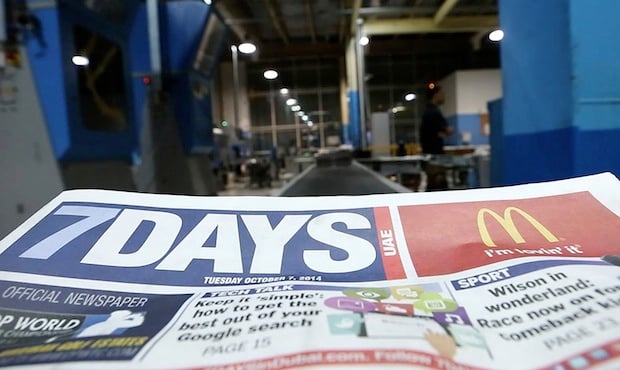 UAE newspaper 7Days is closing down because of the “challenging” media environment, it was confirmed on Wednesday.

In a brief statement, owner 7DAYS Media said that it will publish the final edition of the paper on Thursday, December 22, 2016.

The announcement comes less than a month after 7Days cut its daily print run to weekly with the aim of refocusing on digital.

“Whilst it was our stated intention to re-focus and restructure the business for 2017 and beyond, it has since proved not possible to create an acceptable cost base that could deliver a viable and sustainable business.

“It is therefore with great sadness that we announce the unique 7DAYS news brand will close and thus, cease to inform and entertain the UAE in its refreshing and inimitable way.”

He added: “I have only praise and admiration for the dedicated and talented team that have created such a popular media portfolio over the past 13 years and I wish each of them every future success and happiness.”

According to Campaign, all the staff working at the daily have been laid off.

The team page on the 7Days website lists 47 employees.

The newspaper was launched as a weekly in 2003 and increased its frequency two years later. It is owned by UK-based Daily Mail and General Trust.