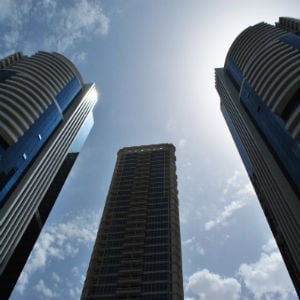 The UAE is looking at introducing a uniform corporate tax rate across its seven states as it wants to reduce its dependence on oil revenue, the IMF said on Monday, but a government official said there would be no new taxes for at least two years.

At present each emirate has its own corporate tax rate but in practice corporate tax is only enforced on foreign oil companies and banks and many companies are based in tax-free zones. Individuals do not pay income tax.

The UAE has been mulling plans to trim its fiscal dependence on volatile oil prices for the past few years and reform its fragmented tax system, which is obscured by different charges and levies introduced by individual emirates.

But deciding to impose a unified corporate tax would mark a major shift in philosophy for emirates such as Dubai, which has used a low-tax profile and tax-free zones to attract firms and cement its position as the Gulf Arab trade and financial hub.

“The authorities are … conducting an economic impact study of a possible corporate income tax,” the International Monetary Fund said in a report following regular consultations with UAE officials on the economy, adding it was one of several initiatives to diversify government revenue flows.

But Younis al-Khouri, undersecretary and director general at the UAE federal finance ministry, told Reuters the study was just a regular exercise with no new taxes planned for now: “It is only an impact study, nothing more than that. We have announced earlier that 2012, 2013 won’t have any taxes.”

“In case of anything … we have to understand what is the social impact on people living in the UAE and what is the impact economically on doing business itself,” he said. The study would be completed in about nine months, he said.

Oil companies in the UAE currently pay up to 55 percent corporate tax while banks pay around 20 percent.

The UAE, which has one of the highest per capita incomes globally of $48,600, has avoided the social unrest that has swept across other parts of the Middle East over the past year but is mindful of possible tension and has raised pensions and wages for state employees in line with other Gulf states.

“It (corporate tax) has been discussed for some time. The question is how difficult it might be to establish the federal tax authority and how difficult it would be to collect the tax and then redistribute the receipts to individual emirates,” said Dean Rolfe, tax partner at PricewaterhouseCoopers in Dubai.

“It is a big hurdle especially when many businesses are established in free trade zones with guaranteed tax holidays.”

The UAE is one of the world’s top oil exporters but Dubai’s 2009-2010 debt crisis has weighed on government budgets, forcing even oil-rich Abu Dhabi to cut back on spending.

Crude oil revenues accounted for 80 per cent of consolidated government income in the UAE in 2010, while receipts from various taxes, fees and customs made up less than 12 per cent, the latest data from the National Bureau of Statistics show.

A new revenue stream would help hedge against a fall in oil prices and expand policy tools in the UAE where monetary policy is restricted because the dirham currency is pegged to the dollar.

The IMF said it supported Dubai and Abu Dhabi’s plans for further fiscal consolidation in the coming years, with Dubai aiming to bring its fiscal accounts close to balance by 2014, and said further funds may be needed to support ailing government-owned entities.

The total debt of Dubai’s state-owned companies (GREs) is estimated to have declined marginally to $76 billion last year, from $77 billion in 2010, while the debt of Abu Dhabi entities rose by $7 billion to $99 billion, the IMF said.

About $32 billion of sovereign and GRE debt is estimated to mature in 2012, $15 billion of it in Dubai, the Fund said.

Khouri said a plan by six Gulf Arab oil producers to introduce a value-added tax, was still under review.

“We are still reviewing the policies and general framework so we are in very early stages of that. We have not agreed on a general framework,” Khouri said, adding that no specific launch dates had been set.

The oil price the UAE needs to balance its states’ budgets has shot up to $84 per barrel in 2012, according to the IMF, from $23 in 2008 as spending has soared. But crude prices at $125 per barrel provide a comfortable cushion for now with analysts expecting a fiscal surplus of six per cent of GDP in 2012.