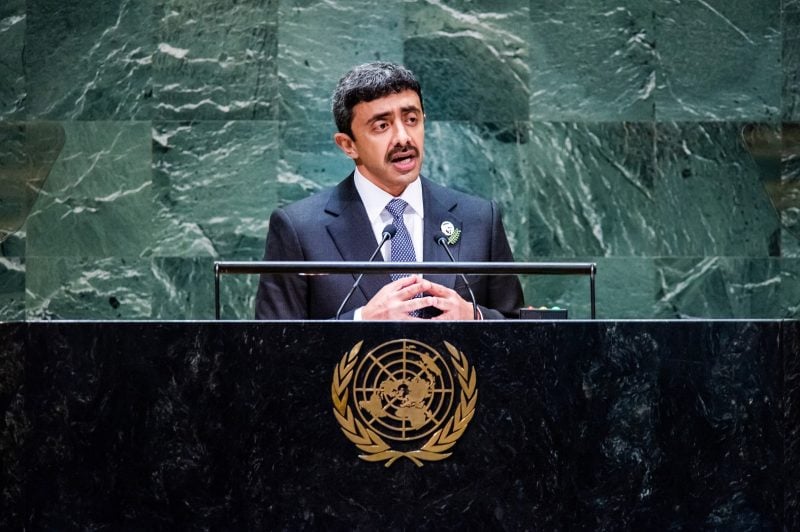 The UAE has urged world leaders to take a firm stance against extremist groups while also calling for greater cooperation to tackle “rogue states”.

Speaking at the annual UN General Assembly in New York, Sheikh Abdullah bin Zayed Al Nahyan, minister of Foreign Affairs and International Cooperation, said that the Middle East region should work together to ensure stability in the region.

The UAE has participated in regional and international efforts aimed at easing tensions and reaching political solutions to the crises in the Middle East, including Yemen, Libya, Sudan, Syria, and Palestine.

“Thus, the UAE believes that strengthening multilateralism is the most effective approach to de-escalate these crises and to address transnational challenges, including extremism and terrorism, to achieve international peace and security,” he said.

“However, multilateralism has not succeeded in resolving existing crises or preventing new ones. Therefore, in order to achieve the goals for which the United Nations was established, we must examine why international efforts were obstructed and explore ways of enhancing the effectiveness of these efforts,” he added.

The region is continuing to witness a “growing presence of extremist and terrorist groups”, which have developed their capabilities with “support from rogue states that aim to de-stabilise and impose hegemony on the region”, he claimed.

“Even when there was international consensus on the need to take collective measures to maintain peace and security, such as the need to curb Iran’s nuclear ambitions by signing the nuclear agreement with Iran, such agreement could not achieve the expected change in Iran’s behaviour or compel Iran to abide by international law and the principle of good neighborliness.

“The nuclear agreement should have taken into consideration the views of the countries of this vital region which fully understand its history. The agreement should have also addressed all aspects of Iran’s behavior, including its interference in the internal affairs of states, its development of a ballistic missile program, and its provision of arms to terrorist groups. We are speaking here about a country that seeks to export its revolution,” he stated.

“We also encourage the United Nations to consult more effectively with these organisations when discussing regional issues,” he said.

He also called for “enhancing the effectiveness of political action to ease tensions and resolve crises in order to fulfill peoples’ legitimate aspirations”.

Relevant parties must work within a comprehensive, transparent, and cooperative framework.

“The chaos that enveloped the Arab world during the past decade has made us even more committed to finding political solutions and more appreciative of the importance of the stability of states and the security of the people,” he said.

“We have long awaited stability in our region. But with hard work and unified global efforts, we will be able to achieve stability in the region. We believe that the coming years will be the beginning of a new era for our region, an era in which our region will become a global economic and cultural center where technology, science, renewable energy, and artificial intelligence will thrive. By hosting Expo 2020 and launching outer space projects, we seek to create a new environment for youth, in which they can aspire to a brighter future with open minds,” he added.