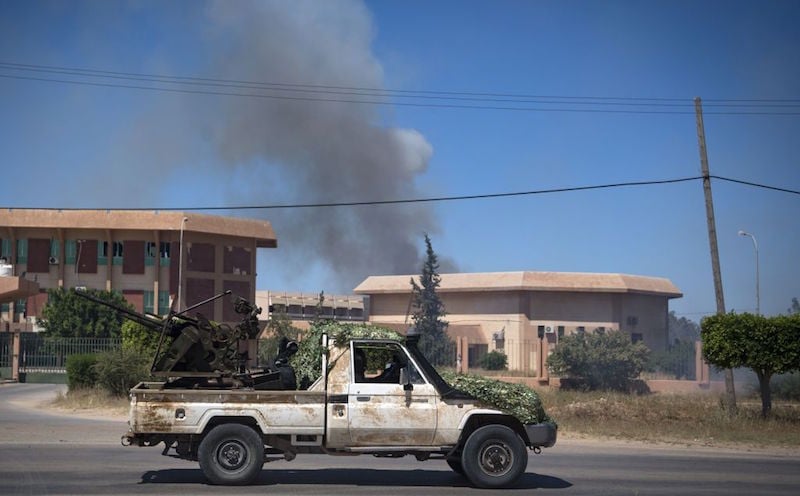 The United Arab Emirates said on Thursday that “extremist militias” were controlling the Libyan capital which its ally Khalifa Haftar is fighting to capture from forces allied to Libya’s internationally recognised government.

The UAE, along with Egypt, support Haftar who they see as a bulwark against Islamist militants in North Africa. A 2017 U.N. report said the Gulf Arab state has provided his eastern-based Libyan National Army (LNA) with military and logistical support.

Haftar’s offensive launched more than three weeks ago to seize Tripoli has all but wrecked U.N.-backed efforts for a peace deal between the rival factions to end eight years of conflict.

“Priority in Libya (is) to counter extremism/terrorism and support stability in long drawn out crisis,” UAE Minister of State for Foreign Affairs Anwar Gargash said in a Twitter post.

Abu Dhabi, which has voiced support for U.N. peace efforts, last February hosted talks between Prime Minister Fayez Seraj and Haftar, the military commander of Libya’s eastern half, where the two agreed on the need for national elections.

The assault by the LNA, the biggest military confrontation in Libya since the 2011 toppling of leader Muammar Gaddafi, stalled on Tripoli’s stoutly defended southern outskirts last week. But fighting has intensified again, with both sides using artillery.

The U.N. report issued in June 2017 said Haftar’s forces had received aircraft and military vehicles from the UAE, which also built up an air base at Al Khadim, allowing the LNA, which is allied to a parallel government based in the eastern city of Benghazi, to gain air superiority by 2016.

A Gulf source has told Reuters that the UAE had provided logistical support to Haftar to safeguard Egypt’s security following cross-border militant attacks.

“Today, he (Haftar) is his own man and trying to achieve his own goals,” the source said.

Since the Tripoli offensive began, 376 people have been killed in the fighting, including 23 civilians, and 1,822 wounded, 79 of them civilians, according to latest United Nations figures. More than 45,000 people have fled their homes.