The UAE leads the Arab world in global competitiveness after making gains over the last decade, according to a report produced by the World Economic Forum (WEF) in collaboration with the world bank.

The organisation said Bahrain, Oman and the UAE had made notable gains in competitiveness over the last decade while Morocco, Algeria and Lebanon had seen their competitiveness erode. 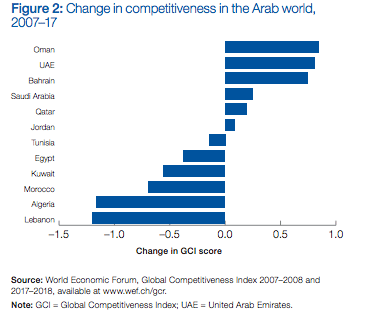 Generally speaking, resource rich countries like the Gulf Cooperation Council members ranked much higher on the WEF Arab Competitiveness Index than resource-poor ones although the organisation noted that the region as a whole had generally suffered from declines in oil prices in recent years.

In terms of global competitiveness, the UAE was ranked 17th, followed by Qatar in 25th, Saudi Arabia in 30th, Bahrain in 44th, Kuwait in 52nd and Oman in 62nd.

Among the trends noted in the latest report were rising concerns about cyber attacks, with half of survey respondents concerned by the trend in the UAE this year compared to 30 per cent last year.

Large increases in data fraud concern were also noted in the UAE, Bahrain and Saudi Arabia.

The WEF said that diversification away from natural resources, increasing the role of the private sector, ensuring opportunities for young people and preparing for the fourth industrial revolution were key challenges in the Arab region.

“Overall, the analysis of the competitiveness strengths and weaknesses of the region compared with OECD countries shows today that innovation, technological readiness, higher education and training, and labour market efficiency are the four areas where the region is lagging furthest behind advanced economies. The region will need to invest in its people,” the WEF said. 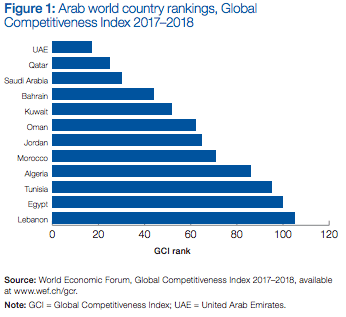 The survey accompanying the report revealed the most problematic factors for doing business in the UAE ranked by executives included access to financing (17 per cent), inflation (14.4 per cent), inadequately educated workforce (14 per cent) restrictive labour regulations (12.6

per cent) and poor work ethic in national labour force (8.6 per cent).

In Saudi Arabia the main concerns were restrictive labour regulations (20 per cent), access to financing (13 per cent), inadequately educated workforce (11.1 per cent), policy instability (7.7 per cent) and tax rates (7.3 per cent).