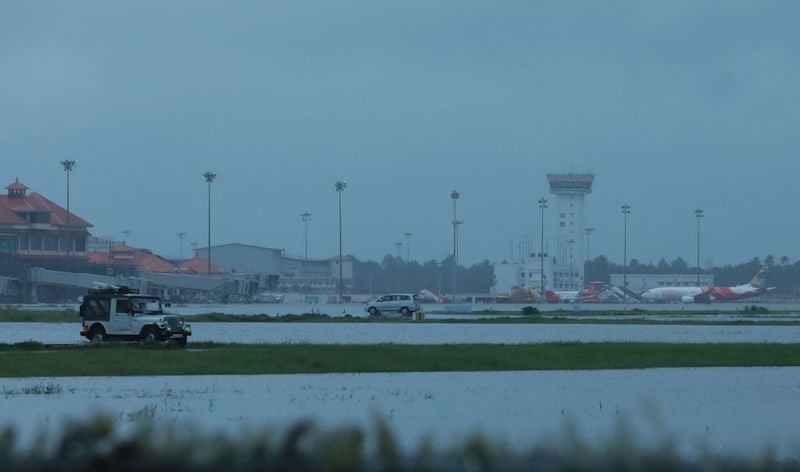 The Indian city of Kochi in Kerala has shut down its airport for four days as heavy rain flooded the runway and the parking area on Wednesday.

Officials said all flights will be suspended until Saturday, August 18.

Torrential rains in Kerala have killed at least 77 people so far, with a red alert issued for several districts on Wednesday.

“Why we decided to take this step is because since last night [Tuesday night] dams like Idukki, Mullaperiyar, Idamalayar have opened their shutters. The water released reaches the Periyar river and one of its tributaries flows close to the airport and it is overflowing, sending the waters to our operational area,” he said.

With more rains expected in the coming days, it was decided to close down the airport’s operations.

“Once the water recedes, it will take us 24 hours to clean up the area. Then only flights will resume. If the water level recedes faster than expected, then things might change. As of now we have decided to close down the airport till 2 pm of August 18,” said Nair.

The Cochin Airport is one of the three international airports in the state, and handled 10 million passengers during the 2017-18 fiscal year.

Emirates, Etihad, flydubai and Air Arabia offer flights to Kochi from the UAE.

Dubai airline Emirates confirmed that all its flights to and from Cochin International Airport have been cancelled until Saturday, August 18.

“Customers connecting to flights to Cochin will not be accepted at the original point of departure till further notice,” it said in a statement on its website.

“Those booked to travel to/from Cochin can opt to change their flights and postpone their departure up to seven days later than originally booked and are requested to contact their travel agent or booking offices to make changes to their bookings,” it said.

“The situation is being closely monitored. We apologise for any inconvenience. The safety of our passengers and crew are our top priority,” it added.

In a statement on Wednesday, Air Arabia also confirmed that four flights were cancelled.

Due to heavy floods, Kochi International Airport is closed until Aug 18th & Air Arabia flights G9425, G9426, G9427 & G9428 to & from Kochi today are cancelled. Passengers whose flights have been cancelled can change their date of travel or cancel their flight at no cost (1/2)