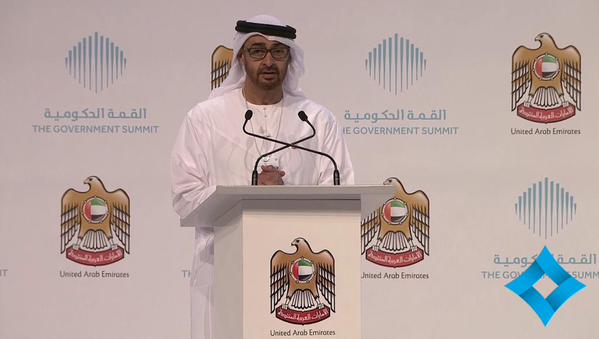 The UAE is focussing on diversifying its economy and can ride out the recent drop in oil prices, Abu Dhabi Crown Prince Sheikh Mohamed Bin Zayed Al Nahyan asserted at the ongoing Government Summit in Dubai on Monday.

Sheikh Mohamed, who is also deputy supreme commander of the UAE Armed Forces, admitted that the dramatic drop in oil prices was causing panic and fear in the market.

“But people forget that in 2008 oil prices were even higher than last year’s high, and then they dropped even lower [after the financial crisis] than the current low. Despite that, the UAE kept moving forward and we have seen several achievements,” he said.

Sheikh Mohamed emphasised that the UAE’s economy was buoyed by its focus on sectors such as education, health, economic diversity, and security.

“In the next 50 years or so, we may not have any oil or gas. And this is something that the government is thinking about.

“Maybe in the next 50 years, after we ship off our last barrel of oil, will we be sad? If we invest today in the right sectors, we will celebrate at that moment,” he said.

The country was already seeing progress in industrial sectors through companies like Strata, which manufactures parts for aircraft makers Airbus and Boeing.

Dubai’s airport is also growing, becoming the busiest in the world after welcoming over 70 million passengers last year.

Sheikh Mohamed also highlighted the UAE’s nuclear programme, which aims to supply up to 25 per cent of the country’s power needs when completed. The first plant is scheduled to go live in 2017.

“We need to invest in education and the right kind of education, which provides skill sets for the next 25 years and beyond,” he said.

“Unity and strength of the country are also essential to ensure our sustainability in the face of challenges.”

Despite all the challenges in the Middle East, the UAE has, since its inception, tried to send a positive message to the world that it is safe and “here to stay,” he added.