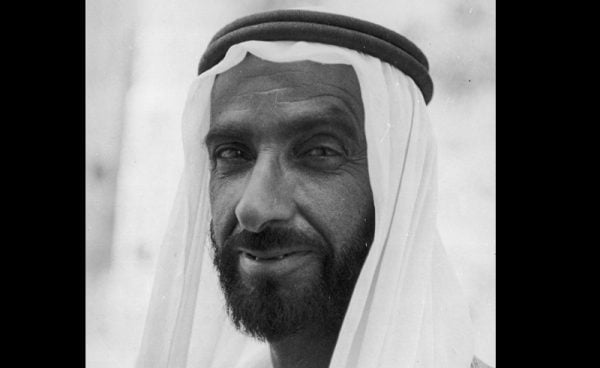 The UAE has declared 2018 to be the ‘Year of Zayed’ to commemorate the 100th birthday of the country’s founding father Sheikh Zayed bin Sultan Al Nahyan.

The announcement was made by UAE President Sheikh Khalifa bin Zayed Al Nahyan on Saturday, August 6 – which marks the anniversary of Sheikh Zayed’s Accession Day – the day he assumed leadership in Abu Dhabi in 1966.

The Year of Zayed will highlight the role of the late leader in establishing the UAE Federation, and his local, regional and international achievements.

Sheikh Khalifa said: “On this day, August 6, a new era dawned upon us all when the late Sheikh Zayed assumed command of the Abu Dhabi government, and began the march towards unity, prosperity and societal development.”

He said Sheikh Zayed set the foundations of modern development across all sectors in the UAE.

“The Year of Zayed is a great national occasion when we will proudly share memories of the life of the founding father, Sheikh Zayed bin Sultan Al Nahyan, and his gift to us of deeply-rooted values, principles and traditions that have become part of our Emirati identity,” added Sheikh Khalifa.

The President also urged all the residents of the nation to uphold the “noble values instilled in them by the late Sheikh Zayed”, including those of wisdom, respect, determination, loyalty, a sense of belonging to the nation, and a willingness to make sacrifices at whatever cost.

In response to the directive, Sheikh Mohammed bin Rashid Al Maktoum, the UAE’s Vice President, Prime Minister and Ruler of Dubai, called for the launch of a comprehensive framework to develop an integrated and consolidated agenda that activates initiatives within all federal and local institutions.

“We celebrate the centennial anniversary of the birth of one of the greatest and most noble men who dedicated his life for the present and future of the nation,” said Sheikh Mohammed.

“We are inspired by the Zayed school of leadership and management. With the founding blocks of the Union State placed by the late Sheikh Zayed, from which we are all reaping the benefits, we will continue this path and look forward with optimism to the future.

“This is why we have launched the ‘UAE Centennial 2071’, which includes a comprehensive government programme with a national strategy to enhance the country’s reputation and soft power and ensure that there are sustainable and diverse sources of government revenues.”

The aim is to invest in education that focusses on advanced technology, to build a system of ethical values for our future generations, to boost productivity of the national economy, and to enhance community cohesion, he added.

“The Emirati citizen was the most important element of development, as Sheikh Zayed’s main objective was to invest in building the Emirati person, believing in his or her ability to actively participate in the building of the nation.

“He has always emphasised that man is the most essential element of progress, and that the most precious wealth of this country is its people, who we must take care of well. There is no use for money without men. This is the philosophy that drives the process of comprehensive and sustainable development of this country.”

Sheikh Mohamed added: “The best way to celebrate the Year of Zayed would be by spreading Zayed’s glorious human and cultural legacy via all the people of the UAE, to continue his inspirational and noble values, and introduce these ideals to new generations.”

Born around 1918 in Abu Dhabi, Sheikh Zayed was the youngest of the four sons of Sheikh Sultan bin Zayed Al Nahyan, Ruler of Abu Dhabi from 1922 to 1926.

In 1946, Sheikh Zayed was chosen as Ruler’s Representative in Abu Dhabi’s Eastern Region, centered on Al Ain. The job involved ruling over six villages and an adjacent desert region. Despite a lack of significant government revenue, Sheikh Zayed was successful in advancing Al Ain and established a basic administration system, personally funded the first modern school in the emirate and encouraged relatives and friends to contribute towards small-scale development.

On August 6, 1966, Sheikh Zayed succeeded his elder brother as Ruler of Abu Dhabi. With the export of the first cargo of Abu Dhabi crude oil in 1962, Sheikh Zayed could rely on oil revenues to start an infrastructure overhaul, constructing schools, housing, hospitals and roads.

In 1968, with the British announcement of the country’s withdrawal from the Arabian Gulf, Sheikh Zayed stepped to action to quickly establish closer ties with the Emirates. Together with the late Ruler of Dubai, Sheikh Rashid bin Saeed Al Maktoum, Sheikh Zayed called for a federation that would include not only the seven emirates that made up the Trucial States, but also Qatar and Bahrain.

The UAE was formally established on December 2, 1971, with Sheikh Zayed serving as the first President.

In 1970, recognising that Abu Dhabi was embarking on a process of rapid development, Sheikh Zayed formalised the consultation process and established the National Consultative Council, bringing together the leaders of each of the main tribes. A similar body was created in 1971 for the entire UAE: the Federal National Council, the state’s parliament.

Sheikh Zayed died in 2004, in his late eighties, leaving behind a legacy as the Father of the nation. He was succeeded as the UAE’s President and as Ruler of Abu Dhabi by his eldest son, Sheikh Khalifa bin Zayed Al Nahyan in 2004.

The principles and philosophy that he brought to government remain at the core of the state and of its policies.

(Text reference: UAE embassy in the US)

“Unity is the way to strength, honour and power. Division only leads to weakness. There is no place in today’s world for weak entities. These are the lessons of history throughout the ages.”

“Our constant thinking of the past and all it has granted us, of the present and all the hopes that come with it, and of the future and all of its bright aspirations, will lead us at all times to build our country, its progress and its development.”

“If Allah the Almighty has favoured us with wealth, our first commitment is to seek Allah’s satisfaction and to express our gratitude to Him by utilizing this wealth to make this country better and to bring goodness to its people.”

“The woman is half of the society; any country which pursues development should not leave her in poverty or illiteracy.”

“I hope that the women in my country will follow their sisters in those countries which have previously made the adjustment to the procession of progress and development.”

“Arab oil can never be dearer than Arab blood.”

“Every individual has to perform his duty. Man is mortal, but his work is not. Therefore, work is greater than wealth.”

“He who does not know his past cannot make the best of his present and future, for it is from the past that we learn.”

On education and progress:

“A country’s greatest investment lies in building generations of educated and knowledgeable youth.”

“A true leader thinks of his people as members of his own family. He cares for them and looks after them at all times.”

“We pay the utmost care and attention to our environment for it is an integral part of our country, our history and our heritage…Our forefathers and our ancestors lived in this land and coexisted with its environment, on land and at sea, and instinctively realized the need to preserve it.”

Quotes taken from the book Father of Our Nation: Collected Quotes of Shaikh Zayed Bin Sultan Al Nahyan, which celebrates the thoughts and ideas at the heart of Sheikh Zayed’s legacy. The Arabic and English language coffee-table book features rare historical and contemporary photographs as well as quotations from the founding father of the UAE. Published by Motivate, the book is priced at Dhs95 and is available to purchase here.